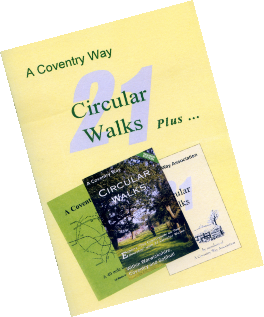 A series of circular walks linked to the A Coventry Way long-distance countryside route, ranging from 2.5 to 12 miles in length. The walks are contained within an area of a 6.5 mile radius from the centre of Coventry, and can be accessed using public transport.

How were these walks discovered

After publication in 1995 of the guide booklet for A Coventry Way, it became clear that to encourage walkers to use these local paths, a series of circular walks linked to the Way would be beneficial. This would not only acquaint them with location of A Coventry Way but would help in keeping the paths open and up to a reasonable standard.

Starting off at a modest seven circular walks, the project grew like the proverbial Topsy. It came to a closure when 21 was reached and by then we had virtually covered the Way.

Our book describes the 21 walks, each with a map and a route description. Most walks include a described shorter version shown as “Route A”. Every walk has its own wildlife notes, written by local ecologist Ian Tanner, and brief interest/history notes. Details of bus routes and bus stops are given, together with suitable car parking places.

The first version of our book 21 Circular Walks was published in 2002. A revised version was published in July 2007. This updated all significant path changes, all stiles which had been replaced and many other details which had changed over the years. The basic layout, and the same 21 walks were unchanged, but it was printed on higher quality paper and with much crisper printing. A re-print version was prepared in 2008, with only a minor printing error corrected.

In March 2015 a new book “21 Circular Walks plus“ was published containing all updated information. Revised editions were published in 2016 and 2017.

The latest edition was published in 2019. It is available to purchase from local outlets and can also be downloaded in a pdf version by following the link below.

The walks are also available to download as .gpx files to store in your GPS device.