“The line in the sand is now drawn, the gauntlet laid down”
Those were the words of Andy Snow after he and Colin Bailey completed their A Coventry Way Double loop in 18 hours 7 minutes setting a fastest known time (FKT). How could I resist?

I’m Michael Scandrett and I have been running ultra distance races and events since 2014; in fact A Coventry Way was the first ultra distance event I took part in so it holds a very special place in my heart. I have known Colin since 2015 when he helped me on a race and Andy since 2017 when he joined Kenilworth Runners and I’ve been friends with them ever since. I moved away from the area two years ago and have missed running on the trails with all my friends. So when I told everyone that I was going to attempt the double I was overjoyed that so many people offered to come out and help. 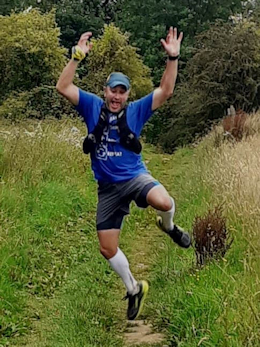 On 25 July 2020 I met with Colin Bailey and Chris Lyons at 05:00 in Kenilworth at our start point. We set off at a good pace and it was great to have a catch-up as we went. At Brinklow we said goodbye to Chris who had parked his car there the night before and had a chance to stock up on supplies. Colin and I set off again, moving at a fairly decent pace. Unfortunately, Colin began to feel unwell just after Bedworth so we slowed a little until he told me to get going and that he was going to phone for a lift home.

At around 26 miles into the challenge I met Andy Snow just before Corley Moor and a welcome sight he was too. The heat of the day was building and the fresh supplies were very much needed. We waited for Colin to arrive to make sure he was safe and well before we said goodbye and set off again at a good pace with Andy being on fresh legs. The miles just drifted away while we chatted and as we approached Kenilworth on the Greenway even the heavy rain could not dampen our spirits.

Lap One took 7 hours 10 seconds which I was happy with. We got fresh supplies from my car and headed out on Lap Two. At Stoneleigh we were pleasantly surprised by friends Jen, Dez, Simon and Stef who had set up an aid station for us. After a quick chat we moved on again.

It didn’t take long to realise that the heavy rain that was helping to cool us down was hindering our progress. Fields and paths that had been easily runnable on lap one were now sodden and muddy. Progress was slow and tough, especially with a kilo of mud on each foot. Even so the miles kept ticking away.

At around 66 miles we arrived back at Andy’s van and I had a little sit down while I emptied my shoes of all the grass seed that I had collected. It was time to say goodbye to Andy but before I headed out we worked out that I could not only beat their record but that I could beat 16 hours. At this point I was a little sceptical, I was getting tired and was due to run the last 14 miles alone which didn’t really appeal. 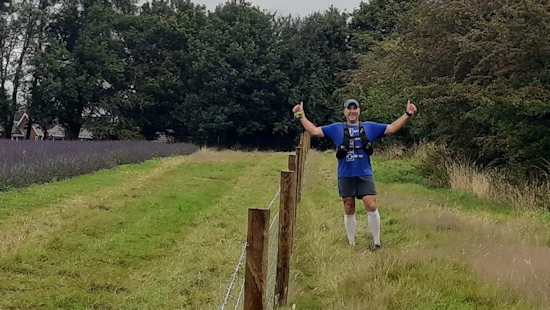 Mike’s in lavender near Bubbenhall

I got moving and was pleased to find that my legs agreed and still did what I told them. I was moving well and was soon running down the hill into Meriden where Colin, Simon, Stef, Jen and Dez met me to give me fresh supplies. I was feeling good with a little over 8 miles to go so I moved on pretty quickly. With around 4 miles to go the heavens opened again and the thunder and lightning started. I was starting to look like a drowned rat but at least I wasn’t too hot. I put in some speedy miles for that time in the challenge and even clocked the 78th mile at under 9min/mile.

I arrived back in Kenilworth at the start/finish point to be welcomed by Colin and Deb Bailey and soon after by Chris Lyons. The time, 15 hours 23 minutes 50 seconds, which was faster than I planned by some way, and a new FKT. 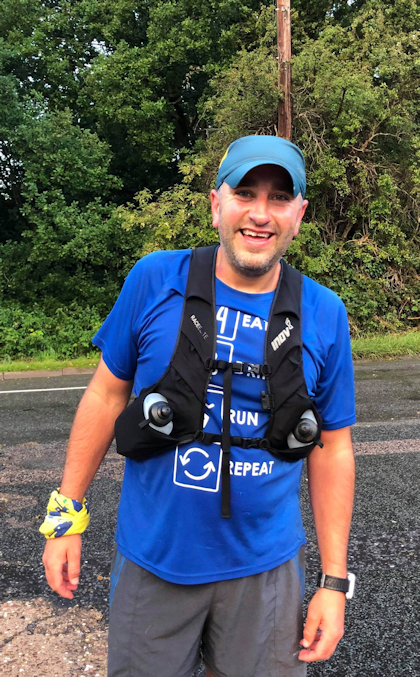 All smiles at the finish, with a new record under his belt

Looking back I think that with a little change of plan and a little luck with the weather that I could take at least another 30 minutes off that time however it might be up to someone else to set a faster time first.

I would like to thank everyone who came out to help me complete this challenge and also A Coventry Way Association for all the hard work they do in keeping this beautiful route clear and well signposted. If anyone is interested in doing a long distance walk or run I can think of no better place to start.