I am Andy Snow, 43, and I have lived in Kenilworth since 2014, joining Kenilworth Runners in 2017. I have been running multi-day events and ultras since 2006, including 4 A Coventry Way challenges. I am also a centrurion, running the Chester 100 in 2019.

The idea of running a double A Coventry Way occurred to me in late March 2020. I wanted to get a high mileage run completed during lockdown, the route is very close to home (I live only 300m from CP1) and it is easy for our crew to support. I use the course as a training route and try and get around at least once most months.

The run on the 29 May was an attempt at the double (hence the speed), but Colin and I only managed a single loop. We started slightly earlier at 15:00 and we walked the first 15 miles, partly due to heat and partly to keep our speed down. We both really suffered with the temperature, which was still high after 22:00. Also, as we walked so much both of us developed blisters, which is very rare. We decided that 40 miles was enough and to rest up for another push in a couple of weeks.
By accident rather than design I decided on the 19 June as the date for the double, as I had completely forgotten it was nearing the summer solstice and we would only have to endure a few hours of darkness. We both tapered during the week, posting only around 10-15 miles before Friday.

Looking out of the window on Thursday I was concerned about the weather, and it didn’t look too great on Friday morning either. I started mentally preparing for a damp few hours of running, but the sun came out and the afternoon wind picked up in our favour and nicely dried out some of the route.

I managed to get the afternoon off work to do some last-minute prep, and have a cheeky hour’s kip, Colin was not so lucky, he was still on conference calls as he was pulling his trainers on! We were pretty much ready to go at 16:00, but a couple of photos and quick goodbyes meant our actual start was 16:06. A small gathering of well-wishers was on Common Lane with us; Deb, Colin’s wife, Dan and Harry his two boys; Rosslyn, my long suffering wife; and Ted my dog were there to make sure I left. 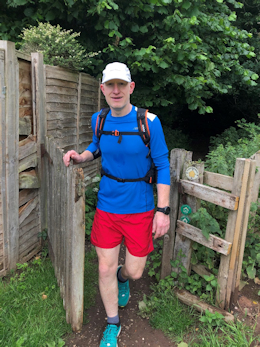 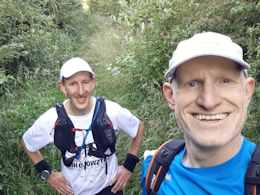 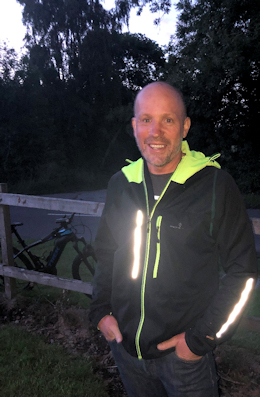 Conditions for the attempt were near perfect, if a little humid, and we set off up Knowle Hill and across the golf course. There were some highs and lows: happily shifting along the Oxford Canal reaching speeds of 10:20m/m followed by the trudge across the worst field of the whole route between the B4029 and the Rose and Castle pub in Ansty. Soul destroying. We made steady progress completing the first of three marathons in 5hrs 8mins, our time spent waffling and trying to keep our pace down.

A friend of ours, Stephen Chalkley, met us at the Red Lion, (near CP7) at mile 29 at 21:45. Our head torches had only just turned on as night was closing in. During the 5 minute stop we were treated to Coke, crisps, Mars bars and Steve showing off his new bike.

So feeling healthy, fed and appreciating the very clear night we were off again towards the half way point. The Kenilworth Greenway is a treacherous stretch of A Coventry Way, it’s flat with no navigation required, so a real stumbling block for the normal Challenge as you can find yourself clipping along at 08:00m/mile pace for 3 miles or so, which in the first section of a 40-mile ultra is perhaps a mistake for most of us normal runners. The section is just as dangerous in the double attempt, as we could practically smell the tea waiting for us at the Common Lane checkpoint.

After spending the previous two hours deliberating, I decided to risk tempting fate and change my socks at the checkpoint, treating myself to a fresh pair. Colin was happy with his, but went for a new T-shirt. I was expecting to put on a jacket, or at least a base layer, but neither were needed. We downed three brews, more crisps, and inhaled pizza and pork pies. We finally dragged ourselves out for the second loop at 00:55, around 10 mins earlier than planned, and we were happy to get moving again. This happiness was not shared by Colin’s spaniel/favourite child/running companion Jasper, who watched in abject misery as Colin and I ran off. Out of interest, I burnt through 5,367 calories and 76,196 steps on the first loop. 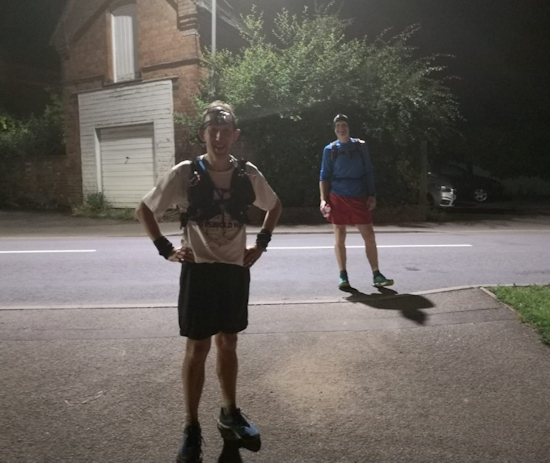 About to set off for the 2nd loop, full of food

We walked from Common Lane to the end of the golf course, only starting to get a wiggle on by Kingswood Farm. Although we had no rain, the grass was sodden with dew, so my feet didn’t stay dry for long. I have run A Coventry Way and other ultras many times through the night and those dark hours between 2am and sunrise are always hard, but with it being summer solstice the birds were singing again at 03:30, only four and a half hours after they stopped, so a mercifully short night.

Torches were on, heads were down and we were moving quite comfortably. After bumping into a deeply suspicious character on his way to celebrate the sunrise on the top of Brinklow Castle at around 4am, we were looking forward to getting over the hump at Bedworth and meeting Rosslyn and Ted at mile 67.

We were bang on time for the checkpoint and were met with smiles, encouragement, a wagging tail, cheese sandwiches, salty potatoes and tea. 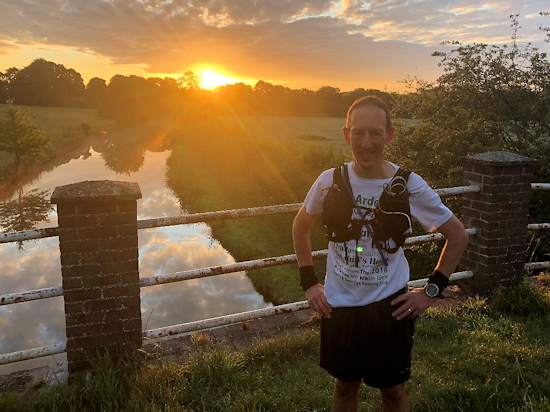 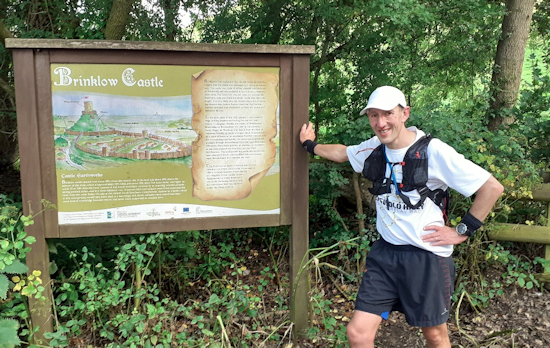 Once we had reached 67 miles we only had a half marathon to do, both knowing we could muscle through a half with gritted teeth. The sun was warming us up nicely and feet were feeling good, the only problem was that all the stiles from the first loop had been replaced by ones 6” taller, or so it seemed.

The run back down to Windmill Lane was pretty uneventful, except for the barking dogs as we quietly crept through the garden at The Laurels. We did leave a little drop bag in the bushes the night before when we met with Stephen so we were looking forward to a quick bite, but Ian, Kenilworth Runner Dorota Woloszynska and Stephen met us in front of The Red Lion for a quick hello, which was a great surprise, and really appreciated. Ian and Dorota jumped in the car and headed to the Queens Head to meet us for the final leg, whilst Stephen left to run in Leicester.

We met Ian and Dorota again at mile 73 at 07:45; 6hrs 53mins after starting the second loop and safely ahead of my schedule. After a much-needed slice of orange we were pushed up the steps towards St Lawrence Church. Having new companions put a real spring into our step and we pushed on. Ian and Dorota’s encouragement over the next seven miles was excellent.

Our final real struggle was the climb up Hodgett’s Lane over the railway, which is always painful; it wasn’t so bad on the first loop, due to the fact it was dark and I couldn’t see far up the road!  Dropping down onto the Greenway for our glory miles was blessed relief. We were met by Deb which was great and we coasted home. 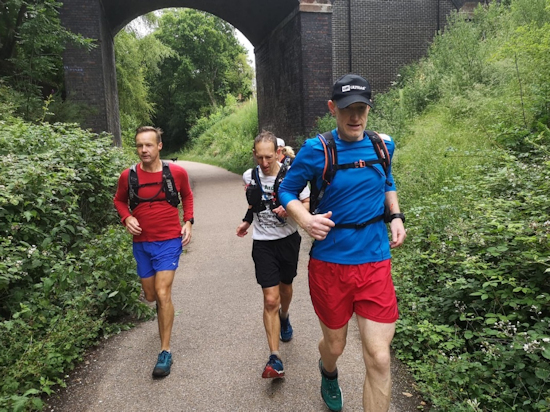 Coming down the Greenway, glory miles, with Ian 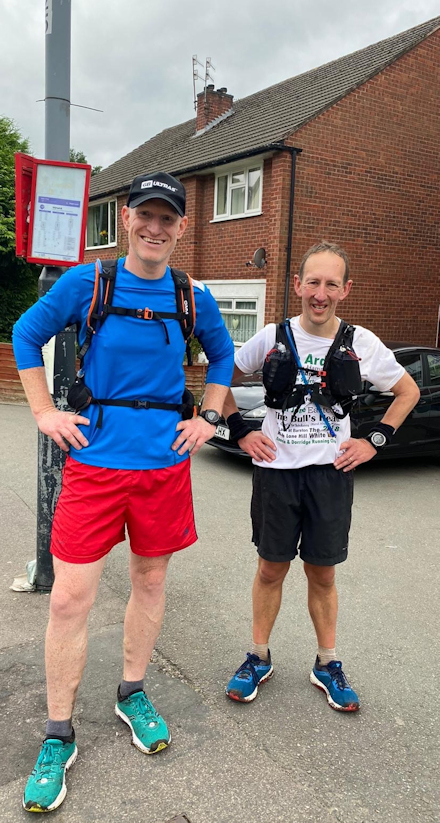 Finished, and needing our beds

Thank you to A Coventry Way Association for designing and maintaining such a wonderful course, a real gem, and to Kenilworth Runners, all our supporters and crew. Obviously Mrs Snow and Mrs Bailey get special mention for putting up with the hundreds of miles before this 80ish, and the constant worry that whenever Colin and I run together one or both of us have a stupid idea…….. Treble?

Supporting Runners from Meriden to CP1