An Athletes View on the 1998 Challenge Event by John Aylmer

What is the Coventry Way? It is a route using mainly footpaths describing a rough circle around, and about 6 miles from the centre of Coventry. It shares part of the route to the west with the Heart of England Way, and part to the east with the Centenary Way, as well as utilising the Greenway (the disused railway line to Kenilworth), and the Oxford Canal towpath. It can be walked, jogged or run at any time of the year, either as a whole, or in sections, or as some folk have done, walked it at night.

What is the terrain like? Mostly off-road; I’d say not more than a couple of miles of road. Fairly flat, though there are seven flights of steps, over 100 stiles, and 30 gates of various kinds. You will cross dozens of meadows with varying depths of grass, fields in various states of agriculture depending on time of year (ploughed. harrowed, seeded, cropped, and harvested), and a golf course. You will walk on pretty enclosed paths, rough paths. ‘nettly’ paths, woodland paths, farm tracks, farmyards, towpaths, footpaths, and bridges. You will walk under bridges, through a tunnel, through a castle, through a factory and through a private garden.

Will I get lost? Not very likely. Not if you buy the excellent book accurately, describing the route in maps and text, at about 2 miles per page.

What is the Coventry Way Challenge? It is an event designed to encourage use of the route for walkers, individual joggers and runners, and relay. teams of 8. This year it was on October 4th. There is no official start time, nor necessarily an official start & finish. However, if you wish to be timed, you start and finish at the Queens Head in Meriden. There are no marshals and no drinks stations, and waymark signs are sporadic. If you do intend to jog or run the route it is a must to ‘reccy’ the course first, otherwise the amount of time spent on navigation over 40 miles (over 200 instructions in the book) would be daunting, as would be the effect of taking an occasional wrong turning. Even having done a ‘reccy’. you must be careful – some fields, and their paths, had been ‘ploughed and scattered’ by the time we did the event!

Early on Barry found it hard to jog so slow (9.30 pace). At 6 miles Bob Carey appeared and took our rucksacks in his car, appearing every 2 miles or so with drinks and rucksacks, right through to 32 miles where he was running a relay leg. Couldn’t thank him and his dad enough!

At 9 miles a group of faster runners shot by, us. At 18 miles Dale dropped out (knee). As our legs tired, the roads became purgatory to run on – Barry took to walking bits of road. but strode out so well, 1 had to jog to keep up with him. 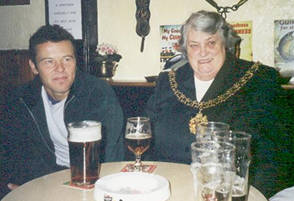 Photos with the Lord Mayor, and a couple of pints (she paid!). Big cheers in the bar whenever another runner or walker arrived. No entry fee, and a Tee shirt.

A very small, very friendly event – congratulations to the organisers. It would be nice to see a few more people taking part, but it clashed with so many events this year.

Next Year perhaps a relay team to try to crack the record of 5.08 set by Sphinx?