The Story of A Coventry Way 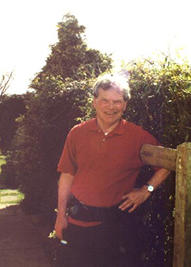 In the early seventies Fred Dowell and I were entering the Karrimor Mountain Marathons. To get off road we tried hard to find routes in the countryside around Coventry. A couple of evenings a week would see us embark on a 10 mile run in the local countryside and it was apparent that the green circle around Coventry was quite inviting.
During this period I had met someone who was preparing a route around Leicester. At the same time I was working at RR in the Future Projects office and lunch times were a drag. Fred and I thought that a route would go, I still had the two old one-inch maps of Coventry (132) and Birmingham (131) on which I set out a series of circles centred on Broadgate.

It was obvious that all had problems but a five mile radius would give a nominal route of 35 miles or so that could possibly be completed in a day. Meanwhile Fred and I kept looking for 10 mile runs, off road, that roughly fitted this parameter. We used to take 80 minutes and at the time the shout of “who do you think you are, David Bedford?” was often ringing in our ears when we trotted past any pub.

The South, East and West routes were fairly natural passages by-passing Coventry, particularly the West and East, and it was no surprise to me when the Heart of England was opened (1980) and much later the Centenary Way. Getting through Bedworth was going to be difficult, pushing further North around the top of Nuneaton and pulling back on line was unattractive to the objective of a near continuous circle.
There was only one way to see whether it was practical, so in June 1974 armed with my marked up 1inch maps and with Duncan, my son of 14 at the time, we embarked on the long journey. We also carried a roll of 6 in/mile maps, 16 of them purchased from WCC at £2 to £3 each (a significant expense for us in the early 70’s). The start was at the top of Common Lane, the nearest point to where we then lived on Kenpas Highway.

The M6 and Warwick bypass did not exist then and some of the footpaths were obstructed with crops and barbed wire etc. The stiles were overgrown and if they existed were in a bad state. The path from the A45 at Ryton on Dunsmore to Wolston was drenched in rape up to its full height. Duncan and I were fully prepared and out came the compass and a course set for the River Avon. We struggled through this vicious crop and after 10 minutes were feeling quite exhausted, we had only been going for an hour or so. I lifted Duncan up onto my shoulders to give a superman’s view of the route ahead and thankfully his observations helped us to get onto the riverbank. I recalled this incident when I made a route through the maize for Bob Brandon’s epic run in 1997, he gently and humorously tweaked me about the lack of straightness.

There were many difficulties but the route I had worked out through Bedworth went well, and the three small fields leading to Astley Lane still thankfully had their hedges intact. Duncan kept my spirits up and Iris and Nicola came out with the necessary food and drink to maintain our horsepower. However, after 25 miles or so he asked me if he could have a rest and join me later for the finish. I knew that I would need his help along the last stretch.
At Carol Green, I was feeling low and went off route to the phone box at the end of Benton Green Lane. “Come and get me I have had enough”. I sat on the pavement outside the phone box dejected, the dream of a route that could be completed in a day was in tatters, it was too long for me. The mental stress of surmounting all the obstacles and fielding queries from landowners and farmers on route were beginning to take its toll. Iris arrived in Folly (our VW Dormobile) and out came the tea, sandwiches hot soup, and a large dose of Kendall Mint Cake. Iris, after a few words of encouragement left Duncan and Nicola with me and drove back to the starting point. 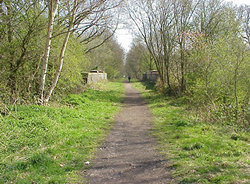 It was late, dark and very eerie as we walked along the old Kenilworth – Berkswell railway line. Support from your offspring can be invaluable and in this instant although fairly young they supported me like being in the front row of a scrum. I wasn’t going to do much hooking that day! It took ages as we slowly edged our way along the easy path. “Where is Iris”, we kept flashing our torches but this leg of the route is longer than you imagine. Eventually we saw a small glimmer ahead and it was a very frightened Iris who met us. I was in no state to imagine the effects of a very dark night of a lone woman walking along through Crackley Woods, apparently the atmosphere was not all that reassuring, cracking branches peculiar animal sounds and some other unaccountable noises. Together we got back to Crackley Lane and it was completed in 15 hours.

Then the project was put to bed, pressure of work, other competing activities, the sheer hard work of mapping the route by hand was best left to another time. I left paid work in 1988, and I thought now is the time to revisit the route. Little did I know that there were other jobs lined up for me, not by Iris I hastily add.

1993 came round and it was now or never. I got out the old 6 inch maps from deep storage and out dropped a foolscap map that Duncan had drawn of the route from Grimes Bridge to Ansty. This was a spur and I laid out an A4 in the Meriden area. Rapidly I laid out the 18 A4s required to give a suitable scale when reduced to A5 and then started the mammoth task of walking the route, manually typing, pasting and drawing some maps.
Before publication my friends Keith and Marion Thomas went round the route using public transport, having a lunchtime meal and taking five days. Bob Watson of Cheylesmore also diligently went round the route and made copious notes and also measured the route on the map. As previously mentioned my draft booklet had it as a “35 mile circular route”. The OS required 9p a booklet and we paid up accordingly Unfortunately our first printer left us with 200 copies of booklets that were not fit for sale. We took stock on what we had spent, should we pull the plug? The tide turned when the printer decided that we could take the 200 for free, he had installed a new colour printing machine and this was his first job, he deemed that his experience was worth it. We still were not out of the woods, what can we do with 200 sub-standard booklets. The covers on a relatively good quality paper were retrievable. Some of the pages (spreads!!) could also be utilised so we spent a lot of time sorting out this load of junk with my sister in law Pat who was on a visit. Another printer took the job on and we agreed a price to reprint the spoilt pages and finish the job. Eventually in 1995 the green booklet appeared.

Another blip in the promotion of ACW was the bankruptcy of Outdoor Bound in Coventry, they were our biggest seller and all was lost – not a penny was received (although perhaps we were a little wiser).

Mike Murray (CCC) and Bob Brandon (OD/Sphinx) were very supportive from the start, both impressing on me that I shouldn’t rush things, these sort of projects took time to settle and mature. I published a newsletter to those who were interested in the spring of 1996 hoping that we could start some working parties to help bring the route up to date. Also in 1996 I wrote to the late Stan Hodson then Lord Mayor of Coventry about ACW and its constant proximity to the city. He had recently organised a successful three-day challenge along the Coventry – Oxford Canal Trail, a linear route and the organisers provided return transport. He replied “It is a more than interesting suggestion for a future sponsorship” 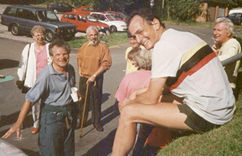 During 1997 Bob Brandon succumbed to my suggestion. His story has been told but this extract from it outlines his involvement.
Those who know me as a ‘part-time’ Sphinx runner will be aware that I am a ‘full-time’ orienteer and have been for some thirty years. Along the way I have met many people with an interest in running or walking through the country-side. One such chap is Cyril Bean, who has recently been promoting a forty-mile footpath circuit of Coventry. The route remains approximately five miles from the city centre, following mostly footpaths with the occasional short stretch of road. As a result of Cyril’s friendly persuasion I found myself at 10 o’clock one Saturday morning late in July setting off from the Queen’s Head at Meriden on a clockwise circuit.

During the same year John Green discovered the green booklet and decided that maybe it was a good project to continue the previous year’s Justice on Legs successful charity project on the Macmillan Way. He invited me to join his committee, I accepted and I was overjoyed to meet Jo and Bob Carey, friends who I had not seen for a long time. Bob suggested that the route directions should be added to accompany the maps, I was reluctant because of the work involved. However Bob in his gentle, friendly way won me over and I completed the task. Many people went out to check and suggest various amendments to the text. Meantime we got our first working party under way, this was in early summer of 1997. Geoff Treadwell, of WCC, agreed to open up the path not used for many years that cut the corner off between Breach Oak Lane and Square Lane. 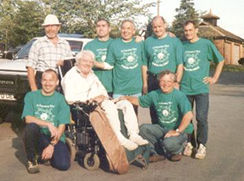 We all looked forward to the first Challenge and both Sphinx AC and Octavian Droobers provided the athletic content with their relay teams and individual entries. I think they also were the only organisations to have individual entries that completed the walk. Sphinx’s Ian Davies quietly got his large bag out and provided the icing on the cake, a group of green T-shirted individuals were proudly displayed for a historic photograph. A Coventry Way Challenge was born and its fourth birthday was on Sunday 3rd September 2000. Sales of the green booklet plus the photo copies produced for challenges (mainly from the 1997 Justice on Legs Walk) enabled approximately £1000 to be donated to Coventry Crossroads. 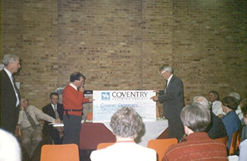 We are on the OS maps and the distance is 40 miles plus or minus half a brick! During the 1999 Challenge build-up the current committee decided to affiliate to the Long Distance Walkers Association which, coupled with some good publicity from the Evening Telegraph, resulted in significantly more national and local interest. The event was the best yet, even the weather was brilliant.

Fred Dowell sadly was seriously injured in an accident in 1975; both he and Ivy had throughout this period of growth maintained an active interest and participation. Their solid and consistent support helped to keep the wheels turning.