We replaced two stiles with kissing gates at Ansty opposite the Rose & Castle Pub and down by the Oxford Canal (GR 399 834 & GR 396 834). On 23 June a smaller work party returned to replace a third stile, and upgrade 2 waymark posts. 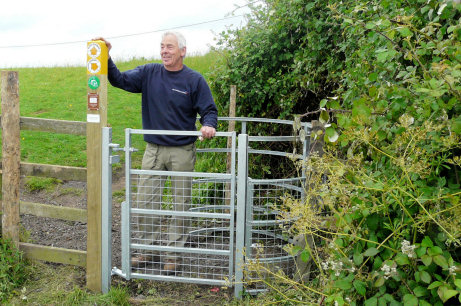 On 23 June a smaller work party returned to replace a third stile (gap/broken stile to be accurate) with a kissing gate. This is at the next border crossing heading along the north bank of the Oxford Canal (GR 395 835). On this day we also upgraded the two waymark posts between the new kissing gate installed on 18 June. 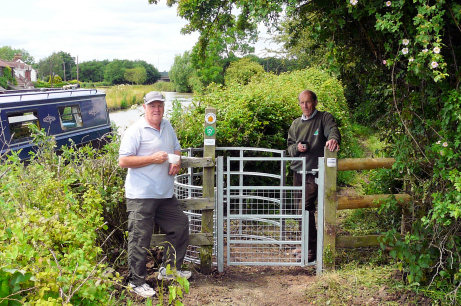 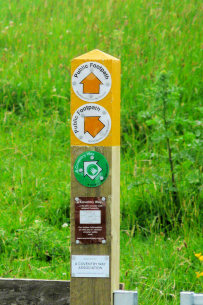 The June work parties were the first where we used the new style waymarks being introduced throughout Warwickshire, and in the case of the new ACW waymark for the whole of the 40-mile route. You will see them in above photos, but a zoomed-in view is shown on the right.

WCC have devised a new scheme to make waymarking clearer and smarter, including being better for those with colour blindness. At the top of waymark post there will be larger standard arrows, including status of the path in words. Promoted route stickers will not be allowed on these, but instead will have their own slightly smaller arrows and be placed below the main waymarks. We also have brown “information plaques” for promoted routes to be used where the path leaves the public highway, which either go further down (as on right) or on the side of the waymark post (e.g. when more than one promoted route featured on that waymark post).

New waymark posts will have a yellow top, and are preferred when needed to make route finding clear. When existing good condition waymark posts or stiles have their waymarks upgraded, the same layout applies, but not with the yellow. This little stretch has a good selection of examples – watch out for others over coming months and years.