We installed two more new kissing gates on the Kenilworth Golf Course to A46 section of ACW. 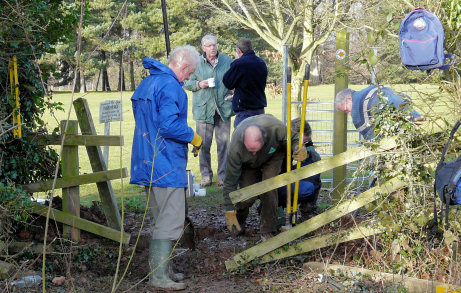 Workers and watchers near the vanishing stile by the golf course

We continued work started in October 2008 on the Kenilworth Golf Course to A46 section of ACW by installing two more new kissing gates. The first kissing gate replaced the rustic stile at the point where ACW leaves the golf course. Many will be sad to see it gone, being the first stile in Warwickshire on the ACW route, and in spite of being wobbly and worn it was relatively easy to climb – others hated it and will be pleased it has been replaced! 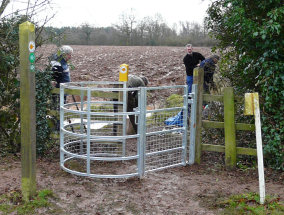 The new kissing gate ready for use, with just tidying up tools left to do

The second kissing gate replaced the next stile to the east where ACW briefly joins the drive to Kingswood Farmhouse. The step from the stile was used to create a seat. The field was being ploughed while the gate was being installed, and as soon as the ploughing was finished the route of the path was restored by driving the tractor down the public footpath. The path was therefore reinstated well within the 14 day rule. Unfortunately this method creates two compacted channels, which soon fill with water and/or turn to mud – a “lighter” touch would be better, such as pulling a light roller across to create a 1 metre visible and reasonably flat path, leaving walkers to follow it and improve the route further as vegetation grows and leaving more ploughed surface for subsequent crops. 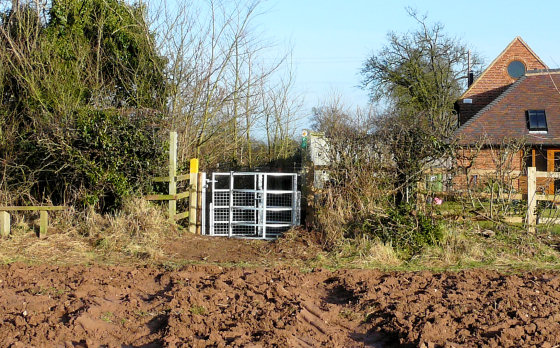 A satisfying day, with bright sunshine all morning only slightly spoiled by the muddy conditions due to recent heavy rain, and the fact that the two fields between the two sites had just been ploughed. Two more stiles to be replaced on this stretch very soon, then the first stile in Warwickshire on the ACW route will be just beyond Tantara Lodge (where there are 8 stiles over the next kilometre).