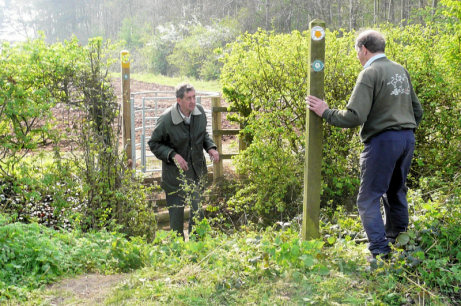 The first new kissing gate is located where the path south leaves Weston Lane, Bubbenhall (GR 362 711). This replaced a stile, but required construction of three new steps to connect from the kissing gate to the sleeper bridge across the ditch.

Note: In the longer term, it could be sensible to replace the steps and sleeper bridge with a higher sleeper bridge so that the path slopes up gently from the path through the kissing gate to the grass verge by the road. This would avoid the steep slope down to the bridge from the verge (seen starting “going over the edge” on bottom-left of photo), and make the site easier and safer for users. 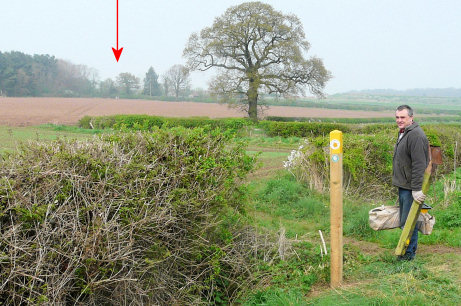 The new signpost (a tall waymark post) was installed by the farm track gap after the first field (GR 361 707). This gives clear direction to the south down the field edge.

On the side shown in the photo (view from the south) the way marker indicates the “Veer Left” towards the first stile, visible in the distance hedgerow towards the left. The red arrow in the sky points also towards the location so you can find it – but on the ground, with the naked eye zooming on the distant headline, the first new kissing gate with the bright yellow topped signpost is clearly visible). 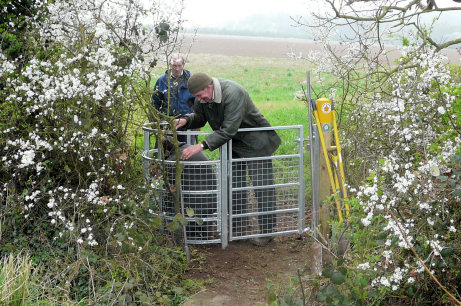 Site 3 – The second kissing gate, with end of s/b in foreground (view from north)

The second kissing gate was fitted by the exit from the second field (GR 360 705). This was previously a gap, but requested by the farmer who will be using this field for stock in a year or two.

Exact positioning proved tricky due to ditches located in front and to the right (as viewed from the north in the photo), the entry having to be linked from the sleeper bridge, and the exit linking to the path which veers left. Four of us tried various locations and finally agreed on the one used. The end result seems excellent, and we hope all who use it will agree. 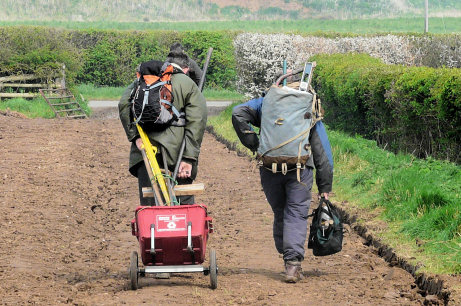 The new trolley, and the usual packhorse, returning tools to the parking space

The day was very interesting. The farmer delivered all materials and tools to the sites in his large JCB wheeled loader. First stop at site 1, and he demonstrated the JCB’s versatility by dropping off the loaded shovel, then using a hook on the lifting arm to drag out the stile and step – giving the team at this site a clear lead. At site 2 we agreed the exact location for the signpost to be clear for farm operations but excellent for giving directions. At site 3 work starting was delayed, with delivery a bit later due to distance but start installation much later (ca.10:40am) due to time taken to determine exact position.

No real setbacks after that, but weather dull & damp till lunchtime then hot sunshine, hard digging – and with a team of only 6 available we were not finished till ca.14:45. John Green had however rescheduled lunch to The Oak at Baginton where meals and drinks are served all day. A long but satisfying day – we will return next month.