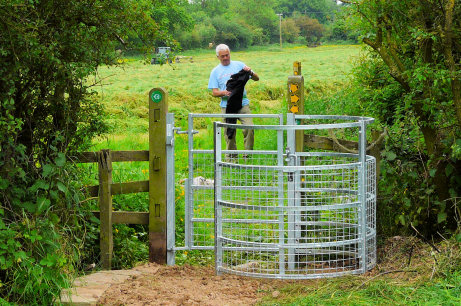 The 1st new kissing gate, showing the raised path in the foreground

The first new kissing gate is located at GR 256 784, where the path used to first meet the wetlands. The new gate is installed so that the path from the north now levels off some 6″ above the old level – hopefully enough to stay above water, even in the flood periods. The boardwalk we plan to install next month will continue at this level over the area of marshland/floodplain for the next 10 metres or so. 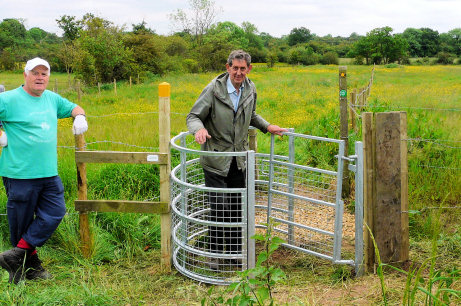 The 2nd new kissing gate, showing the new culvert just beyond the gate

The second kissing gate is located across the next field at GR 257 783. The farmer had already solved the local drainage issues with a deeper ditch and a culvert for the footpath, and will continue with further improvements from here to beyond the “long bridge to mud”. Further on still, we will be replacing 4 more stiles on the path to Carol Green.

John Green summarised the day (quoting from his email):
“I’m delighted to announce that work started yesterday to improve the ACW footpath between Bentons Green and Carol Green. Hence forth known as Bernard’s Avenue. Two stiles were removed and replaced by two Kissing gates. This was the first stage of a project scheduled for June, July & August. As an onlooker once again, I am proud to say that the workmanship, skill, fun and the pint of Bombadier at the Bell was of the highest order. Well done all concerned.

Next month will see the installation of a boardwalk which I believe will be called Bernard’s Bridge.”