We installed the three new kissing gates on the ACW route just north of Carol Green. 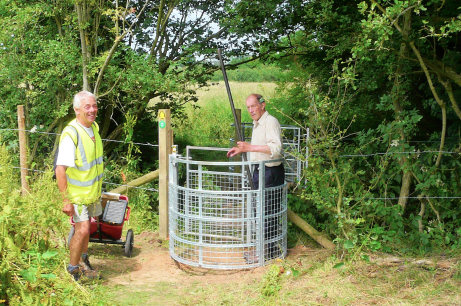 The first & second kissing gate completed, and the last tools being taken back

The first new gate is a kissing gate located at GR 257 782. This replaces a short length of fence which formed a very hard to climb “narrow stile with no step”. This was another priority improvement achieved. 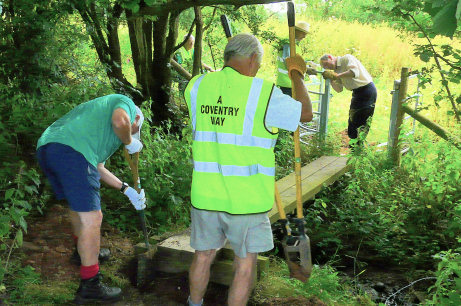 The second gate is a kissing gate located at GR 257 782, just across the sleeper bridge from the first. This replaces a pedestrian gate, which had been installed within the last year, but the landlord had requested an upgrade. We found the pedestrian gate concreted in, so left it in place, adjusted the fence, then added hoops.

In the picture above the first two gates and the sleeper bridge can be seen – but the photo was exposed to get a much better picture than last month of one of the HV Vests – and summer wear to suit the 28°C temperatures. 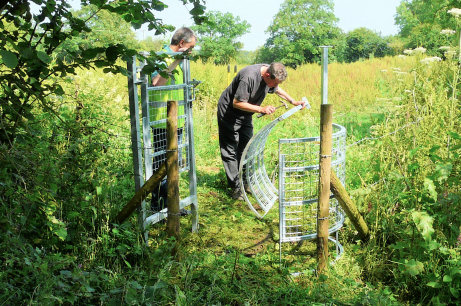 The third kissing gate being lined up to check orientation, and “snags” being removed

The third new gate is a kissing gate located at GR 257 780. This replaces a short length of fence which formed a very hard to climb “narrow stile with high posts”. This was yet another priority improvement achieved. 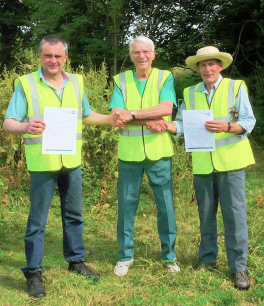 Another highlight of this work party was Chairman John Green presenting certificates to Bill Eve & Tony Kirby, members of A Coventry Way Association, on their successful completion of the Emergency Aid in the Workplace.

The course was presented by St John Ambulance and was ideally suited for the Association to ensure First Aid cover to our work parties Party who are currently replacing stiles with kissing gates on the 40 mile Coventry Way footpaths around the outskirts of Coventry.

In summary a very satisfying day, with priority tasks completed, our commitment to training demonstrated, hot and sunny weather, shade to work in and lots of iced drinks supplied by John.