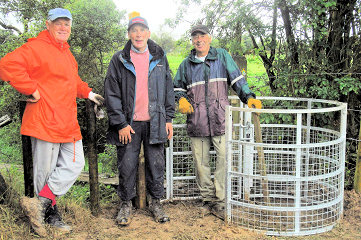 The first new kissing gate, with 3 of the proud & colourful team

The first new is kissing gate is located at GR 258 780 (site 10), two fields before ACW reaches Spencers Lane. This kissing gate replaces an ageing stile just south of the sleeper bridge and the third new kissing gate installed on 1 July. 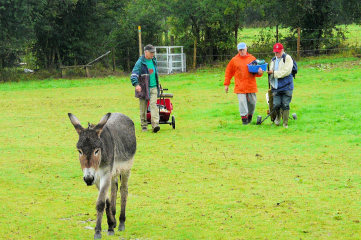 A different 3 of the team for the first new kissing gate, plus their transport returning along ACW route

The second new kissing gate located at GR 257 778 (site 11), one field before ACW reaches Spencers Lane. This kissing gate replaces a “new” stile installed a few years ago when the culvert was widened. We were able to install it so that the new stoned farm track also extends through the new kissing gate. You will also note that we were able to drive our “tool truck” right up to the site – explaining why our two tool trolleys could be used for transport to the first kissing gate. 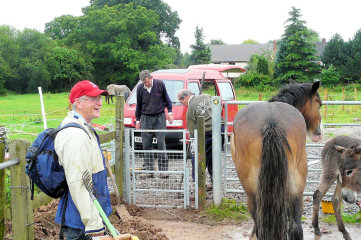 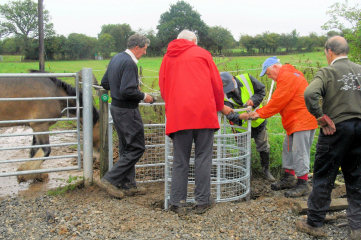 In summary another satisfying day, with priority tasks completed, even though the weather was “somewhat damp” (but after a day of heavy rain making the ground sodden, not too much to wet us, but caggies got well used). The sun came out to cheer us after lunch at the Peeping Tom.