We installed a new boardwalk and a new kissing gate on or near the ACW route just north of Carol Green. 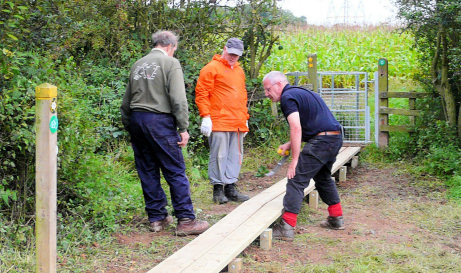 The new boardwalk is located at the point where ACW turns left near a pond (GR 256 784). The boardwalk crosses the marshy/muddy/flooded area which has often been a “difficulty” at this point. The photo below shows the layout of the kit indicating where it all has to be installed, with one of the supports lying on its side (near foreground) and holes for it being dug. Altogether 18 holes had to be dug – maybe we’ll call it the golf boardwalk. 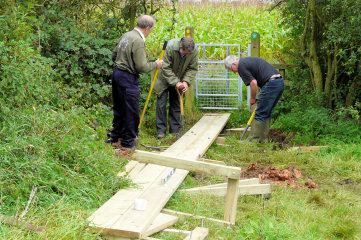 The new boardwalk as construction started

The new kissing gate under construction

The new kissing gate is on Circular Walk 3 at the point where it leaves ACW (GR 258 783), replacing a stile which was too near a ditch and eliminating the unused “barbed wire field gate” alongside the old stile.

A very hard days work, with our latest finish yet (about 4:00pm). Fortunately the rain forecast for “just after lunchtime” held off till we had finished, starting gently as we lugged the tools back to the road. Equally fortunately our planned lunch at the Bear in Berkeswell was still possible at c.4:30, because the Bear is open all day, and all who decided to eat at this time very much enjoyed the good value meals served. We were also very satisfied that we had at last tried building a boardwalk, and that another priority hazard has been improved.