We installed a new kissing gate and two pedestrian gates on circular walk 7 route where it crosses Coventry Road, Cubbington. 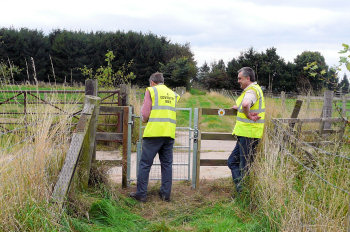 The first pedestrian gate completed replaced a stile in fair condition about 60 metres to the west of Coventry Road. The fence both sides of the gate were rebuilt to neatly fill the gap across the enclosed path. 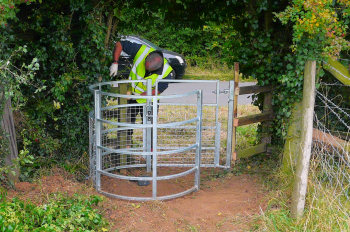 The new kissing gate replaced another stile in fair condition just to the west of Coventry Road. The fence both sides of the gate were rebuilt to neatly fill the gap across the enclosed path and reconnect to the line of the fence in the hedgerow. The gate was installed a foot or so further from the road in order to avoid destroying the attractive arch made by the high hedge, and the arch only trimmed sufficiently to ensure good headroom over the new gateway. A new waymark post was erected on the verge of the road. 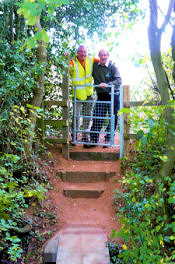 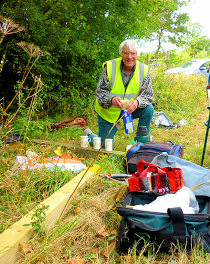 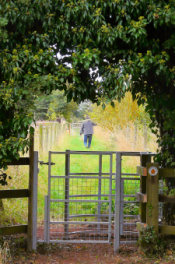 The two new gates to the west of Coventry Road

Last but by no means least, the second pedestrian gate replaced another stile in fair condition, but which did have some risk that users climbing the stile from the east could slip down the steps onto the concrete bridge or into the ditch. The new pedestrian gate makes reduces this risk, being placed a foot or so further back and incorporating a third step (see photo above left). The pedestrian gate is installed to allow easy conversion to a kissing gate should it be decided to be needed, but the team who installed it feel this should not be necessary.

A dry and increasingly sunny day made working a pleasure, though hard ground made some of the holes take longer than hoped, and the fencing work was considerable. With a team of six workers (in three teams of two), and tools only sufficient for two teams it was a busy morning. We only made it to the King’s Head, Cubbington just after 2:00pm – but they now serve food till 2:30pm, have a good choice of real ale and welcomed us for an enjoyable lunchtime.