We installed a new kissing gate, a new bridge with rail, a new ditch and put wire netting on the boardwalk and long bridge – all on ACW south on Benton Green. 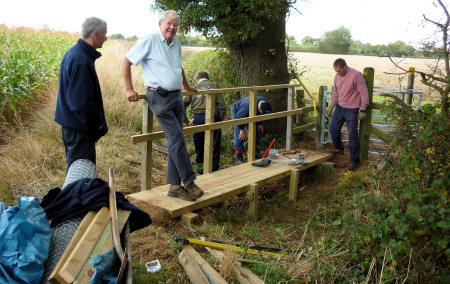 The new sleeper bridge with handrail nearing completion,
with the new kissing gate beyond

The main tasks for the day were to replace the stile and ditch crossing at GR 256 786 with a new kissing gate and a sleeper bridge with handrail. The nearly completed installation is shown in above photo. The photo below shows the old stile, with the tools and some of the material delivered – the rest of the party had gone back to collect more materials. 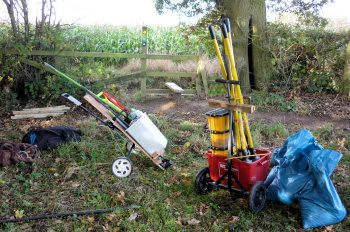 The old stile, with the tools and some of the material delivered

The 3rd, 4th and 5th tasks were fixing anti-slip wire netting to the boardwalk, digging a shallow drainage ditch to the west of the kissing gate and putting stones/ballast surface on the path entering the kissing gate from the north. This finally completed work at this site started on 3 June then continued on 2 September. The photo below shows the end result. 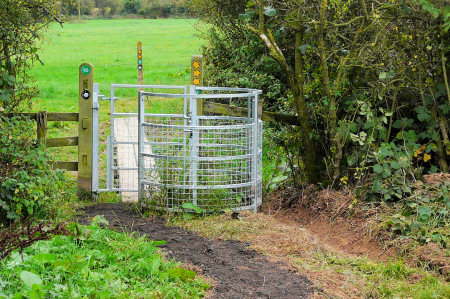 The anti-slip wire netting on the boardwalk, the shallow drainage ditch to the right of the kissing gate and the stones/ballast on the path

The 6th (and final) task was fixing anti-slip wire netting to the “long-bridge”, which has been in place many years but now crosses a much deeper ditch. Photo below shows the finished result as viewed from the east. 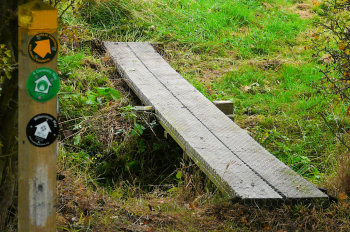 The anti-slip wire netting on the “long-bridge”

A dry and initially sunny day made working a pleasure, though the number of tasks and the amount of work to construct the sleeper bridge with handrail made it a long day. Moving people to Benton Green and carrying tools and materials to site took till about 10:30 and it was 14:30 before we had just about finished, with just the task of getting all the tools back to Benton Green. We were helped with transporting things to and from the site by David & Phil (SMBC team), who also lent us a powerful rechargeable drill and a wheelbarrow. Phil came back about 13:30 and helped us with the sleeper bridge before helping barrow/carry things back to Benton Green. By 15:30 we were in the Bear at Berkeswell having our lunch, a good hour earlier than after the September work party.