We installed two new gates and a new waymark post, on paths in Brinklow, a kissing gate on path R82, a pedestrian gate
and a waymark post on ACW. 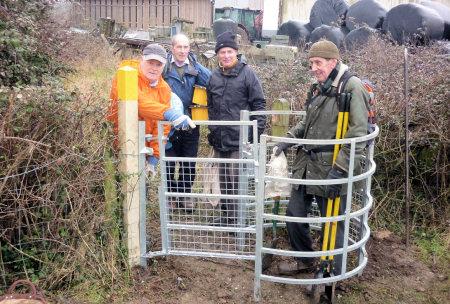 The new kissing gate, with the jumbled farmyard in background 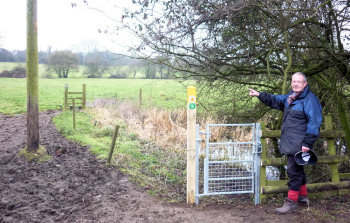 The new pedestrian gate, with the stile due to become another pedestrian gate beyond, and the muddy route over the old canal which will soon be bypassed

The pedestrian gate is on the ACW where it crosses the old southern part of the Brinklow Arm of the Oxford Canal. ACW has been bypassing the definitive path and two stiles by sharing the muddy farm track used by many cattle. This task is the first stage of restoring the official route, fenced off from the muddy farm track – in a few months time we will replace the second stile, raise the level of the path between the two stiles and add a stone surface to avoid all the mud. We will also replace the stile on path R82 as it leaves Butchers Close, and hopefully the other two stiles on ACW/Walk 12, thus creating more stile-free short walks near Brinklow. 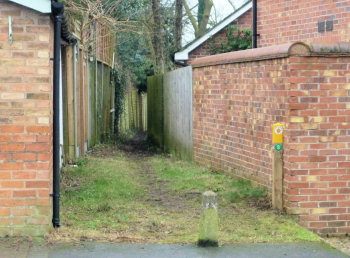 Finally we did a little task of great significance – replacing the waymark post which vanished from the point where ACW arrives on the Coventry Road in Brinklow – this new waymark post removes one of the places people who did not read the map have got lost.

A good day, with the forecast rain being only a few drops, and a team large enough and hard working so all tasks were complete by 12.10pm. By 1.10pm we were all packed up, at the Raven in the dry and served with hot food to eat with our good beer.