We replaced stiles at each end of a footbridge with pedestrian gates, widened a sleeper bridge and also installed a new kissing gate near Allesley Green. 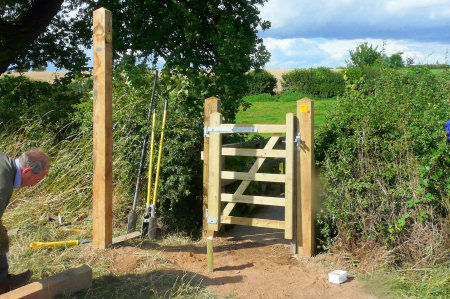 The new pedestrian gate seen from the south

The main task was to improve the bridge at GR 284 806 by replacing the stiles at each end by wooded pedestrian gates with their own new posts, but also to add a new waymark post at the southern end and build steps at the northern end. 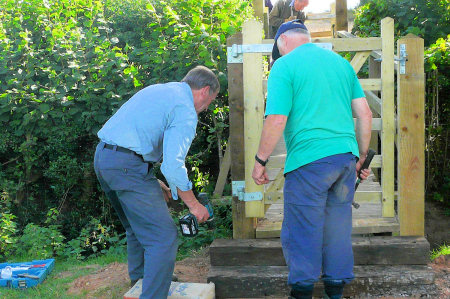 The second new pedestrian gate seen from the north

This main task proved to be a lengthy one due to everything being assembled from basic components, and some tricky decisions on the best way of achieving the excellent end result. Note our new drill in the photo above – without it this task would have hardly been possible, but amazingly only one battery was used. The team of 6 working on the main task put in a long days work finishing about 4:30pm. 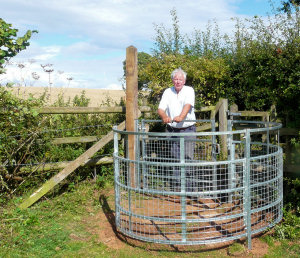 The new kissing gate, including a new oak pedestrian gate and stepping stones through the high accessibility hoops

This was our first work party in the modern series to take on a task with Coventry CC Rangers. The path we worked on is not on an ACWA route, but is one of the principlal routes from Coventry to the countryside, and joins ACW Circular Walk 1 just west of the new kissing gate. We will return soon to replace 4 more stiles with metal kissing gates.

A long day – beating the previous record. We did not even get to a pub for lunch, but ate in shifts from an excellent spread supplied by Tina. By the time we had completed the walk back to our cars it was 5:00pm. 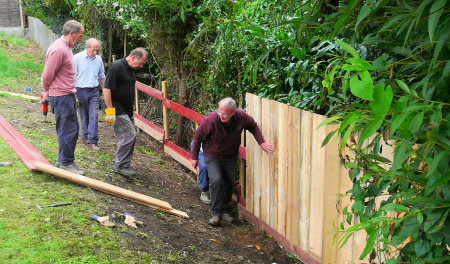 A week later on 25 August we built the first half of a new fence at the 74th Coventry Scout HQ in Whitley, Coventry.