We replaced 2 stiles by kissing gates and built one new large sleeper bridge on Circular Walk 2 between Kenilworth Greenway and Old Waste Lane. 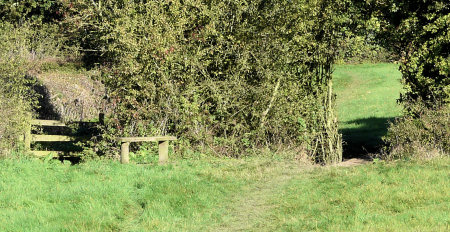 The old stile, the new seat and the new sleeper bridge viewed from the south

The new sleeper bridge spanned the muddy ditch at the other side of the first field after leaving the Greenway (GR 256 767). It also replaces the stile which was on the original definitive path, but was seldom used because of the even wider and wetter muddy ditch in the hedge before it. We therefore also converted the stile to a fence, and made a seat from the step. 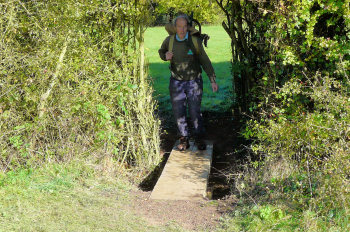 The sleeper bridge was two sleepers wide x 1½ sleepers long, with wooden supports at each end and at the join. The sleepers were new timber, but about the same size as main line old sleepers – hence the “large” description above (but not as massive as the sleeper bridge done on 15 September 2010). 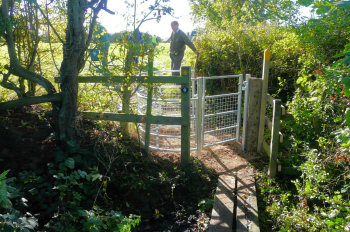 The first kissing gate between the old sleeper bridge & the slope/steps up to the field, viewed from the north

The first kissing gate replaced a stile across the second field after leaving the Greenway (GR 255 766). The stile had to be fitted in between an old sleeper bridge, the “steps” up to the third field and the hedge straight ahead and the hedge on the bank to the left. This involved a lot of digging space in the bank and some careful orientation and construction of a linking fence. We were pleased with the end result, which also leaves space to replace the old sleeper bridge which will be needed before too long. 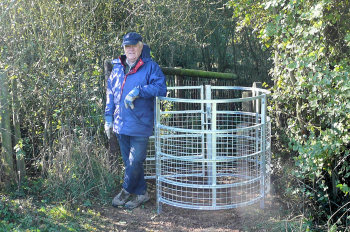 The second kissing gate, just before the narrow path and wide drive down to Old Waste Lane

The second kissing gate replaced a stile just before the narrow path and wide drive down to Old Waste Lane (GR 254 765). This also needed careful orientation and construction of a step to deal with the change of levels previously handled by the stile.

In spite of our working team being only 7 to cover all three sites, all was completed by 13:50 – another satisfying morning’s work, followed by a return to the Peeping Tom for lunch.