We replaced a stile with a wooden kissing gate and a second stile with a metal pedestrian gate on ACW at the end of Windmill Lane, Corley Moor. 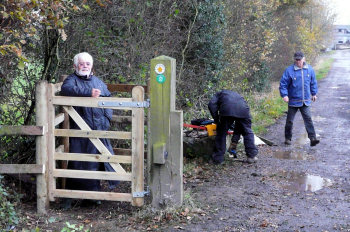 The wooden kissing gate replaced a stile which only came into use a few years ago when a remote control field gate was installed across the road to the farm, which then became normally locked. The “stile” was initially just the fence, but we made it a stile simply by adding a step from an old stile we had replaced. 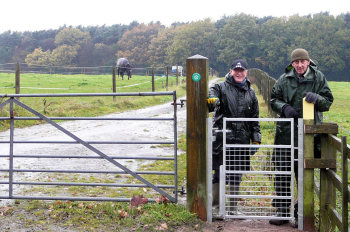 The metal pedestrian gate replaced another stile which also only came into regular use a few years ago when the field gate beside it became usually closed.

Please also note that the farmer has built up a stone and rubble causeway which should solve the difficulty of the flooded/muddy section of path along the southern edge of Birchley Hayes Wood. These three improvements will now be formalised by WCC raising a diversion order to make the route we have used since ACW was created the Definitive Path.

A day with miserable cold rain. Despite the horrible weather we had 9 people turn out plus John with his “NAAFI Wagon” for which I am sure we were all most grateful for a nice warm cuppa. All was completed by 13:30 – in spite of the weather, another satisfying mornings work, followed by a visit to The Bull and Butcher for lunch.