We replaced a stile with a kissing gate and built a new sleeper bridge on Circular Walk 2 between Kenilworth Greenway and Old Waste Lane. 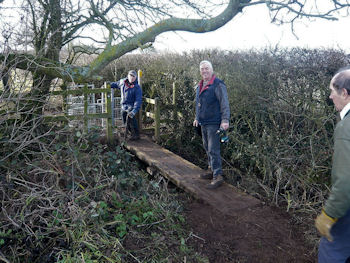 This work party completed the tasks on this path started on 20 October 2010. The first task this month was to replace the old sleeper bridge by the first kissing gate we installed that day. SMBC supplied 4 long planks plus support planks, which produced an excellent bridge. 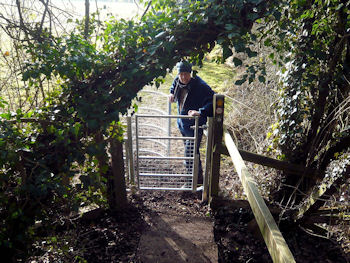 The finished kissing gate viewed from the steps

The second task was to replace the remaining stile at the bottom of the steps (where we added a rail on 16 July 2008) down from Kenilworth Greenway. It is always satisfying to complete all the improvements needed on a path.

A very successful morning. We had no fewer than 10 people there, but everyone was involved with the work and it did enable us to be finished and be away by 1pm. 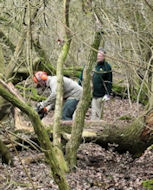 The following week a small work party joined WCC teams and some local residents clearing overgrown shrubs & trees to re-open paths on the definitive routes near Tattle Bank (off the B4095 just west of Claverdon). We then put in 9 waymark posts showing where all the paths should be, and now are.

We came away in the knowledge that we had achieved a good result.