We installed two kissing gates, one pedestrian gate and an extra waymark post on Walk 17A, all on Walkers Farm fields, just south of the Weavers Arms. Later in the month two further work parties built a fence and installed another kissing gate.
This now means that Walk 17A is now a stile-free route. 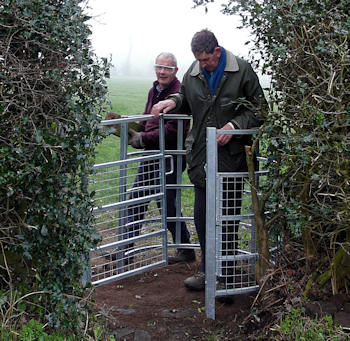 In 2006 we set an objective to create 4 stile-free walks. one in each direction from Coventry. The first was Walk 6 “After Tea” walk at Stoneleigh to the south, completed on 21 May 2006. The second was Walk 21 “The Broad Ridge” at Meriden to the west, completed on 15 Aug 2007. Walk 17A was supposed to be second, but was delayed due to difficulties to get support from a few farmers/landowners, but with all these overcome the remaining sites on the western leg were completed in 2010, and today’s activities completed the eastern leg. Our plan for the day had been set as just two of the three stiles, but initial progress was good so we pushed ahead with the third stile and thus achieved this significant milestone.

The fourth stile-free route will be “Walk 12C” a shortened version of “Eight Bridges” walk at Brinklow using the Oxford Canal as the shorter “short cut”. This only needs one more stile to be replaced, but has been delayed – but the final go-ahead from English Heritage is imminent so completion could be within weeks or even days. 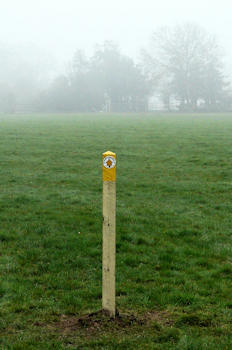 The new waymark post, with the new pedestrian gate in the distance 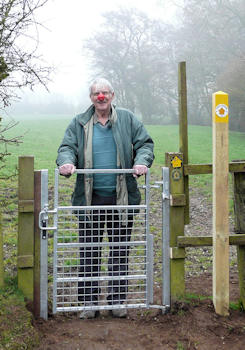 The tasks were all relatively straightforward, but with a few interesting twists. The first stile was hidden in a wide holly hedge, so wide that it almost hides the kissing gate, in spite of a very heavy pruning we had to do the make room. We added an isolated waymark post a short distance away from stile 1, which serves to make absolutely clear where the path goes – with good eyesight and a clear day you can see the waymark post by the new pedestrian gate directly beyond it. The waymark post has four 6″ nails hammered in near the bottom, all set in concrete 30″ below ground, which we hope will prevent the cattle moving it.

At site 2 a stile was replaced by a pedestrian gate, which fitted in well, despite warnings there may be lots of concrete to tackle or avoid – there was concrete, but not much in the way. 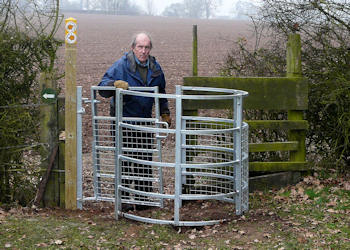 The final stile replaced by a kissing gate

The final stile replaced on Walk 17A is in a wonderful setting by a pond where it is believed Oliver Cromwell made camp before his army attacked Fillongley and demolished both castles. It is now a delightful spot to lean on the gate and enjoy the view. Another bit of history we preserved is the WM seen on the left pointing along a path going direct to Wood End Lane – this is in fact an official WCC WM, but a type used well before most of our memories. (Note that this definitive path is on the NW side of the hedge, not the SE as shown on the OS map).

An excellent turnout, and a record time to complete 4 tasks, spurred on by the milestone and the 1:45 last hot lunch food orders target at the Weavers Arms. All who stayed enjoyed the excellent food and ale.

The completed fence, with original half in foreground

A week later a small work party of 6 completed the new fence at the 74th Coventry Scout HQ in Whitley, Coventry. The first half was done on 25 Aug 2010, see WP News 57.

Another week later, on 30 March yet another small work party returned to Walkers Farm to replace the 4th stile, on the path going direct to Wood End Lane mentioned above. With rain forecast, we started early at 9:00 and finished at 11:30, just before the rain came down.