We replaced one stile on Millennium Way (MW), and installed a new kissing gate on Walk 1/MW, on the Broad Lane to Back Lane MW leg. 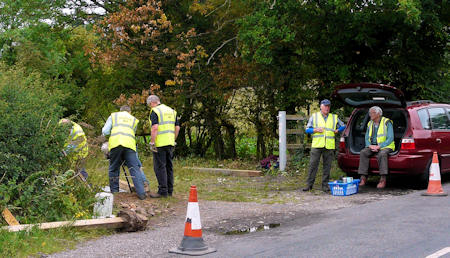 The days task sounded as if it would be a simple installation of two metal kissing gates. BUT one of them was at the entrance to the farm track leaving Broad Lane, which involved fitting in with the farmer’s plan to install a filed gate, and SMBC actions to clear away dumped rubbish and flush out the culvert going under Broad Lane. We spent some time clearing undergrowth and branches in preparation, and then in helping the SMBC team clear the rubbish, then more waiting for the farmer to come with the new field gate.

Digging out the old slam post for the field gate proved hard work, solved in the end by digging a new hole just in front of the old one. Digging the holes for the new kissing gate was also a challenge, because the whole entrance area was well compacted concrete rubble. By 3:00pm however we had cracked it, and we believe it was a job well done.

The second kissing gate had its own difficulties, but that was finished an hour or so earlier.