We replaced two stiles and installed a new sleeper bridge on Walk 1 on the Broad Lane to Back Lane leg. 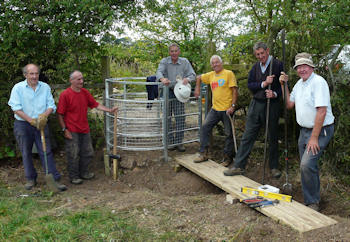 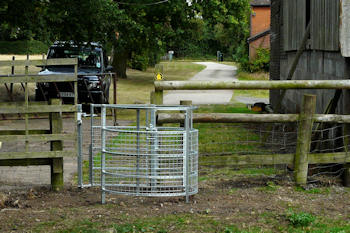 The finished kissing gate long after the team moved on

The first sites “simple” stile replacement proved a bit harder than expected because all 4 holes were in an area of compacted stone and concrete rubble. However the team were compensated by supplies of tea from the farmer, plus a history lesson informing us that both sites are on the line of a former carriageway – he even knew the driver of the last carriage to use that route in 1909! 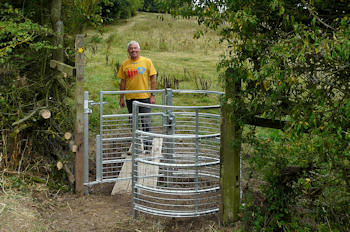 The finished kissing gate and bridge from the farm track

The second site needed careful planning to fit a kissing gate and a sleeper bridge in the steep gap where the stile acted as barrier and a step down into an often flooded shallow ditch. The finally agreed plan worked out very well, though all 4 holes were in an area of compacted stone and concrete rubble as expected, plus a few hedge roots. The stones, supplemented by a few larger ones found nearby were used to build a dry stone retaining wall for the hoop area, and the sleeper bridge was sited to keep near the hedge but also cross the shallow ditch. The team from the first site joined us to help build the bridge, while others finished making good the fence and finishing the gardening and ditch digging.

An enjoyable day, finishing work a few minutes before 3:00 pm and then having lunch in The Bear at Berkswell.