We installed 7 new or replacement waymark posts on ACW going north from Ryton, then two weeks later on 16 November the main Work Party replaced 2 stiles with kissing gates on Back Lane to make Walks 1 &1A stile-free, and repaired a wooden kissing gate and stile nearby. 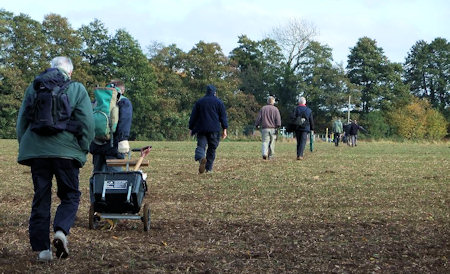 Many of the team, and one of the waymark posts

We replaced or installed 7 tall waymark posts to clearly indicate the route to walkers and farmers of ACW where it crosses diagonally over fields between the A45 near Ryton-on-Dunsmore and just past the sewerage works on the way to Wolston. This should result in better re-instatement of the path by farmers, and more accurate use by walkers & runners. 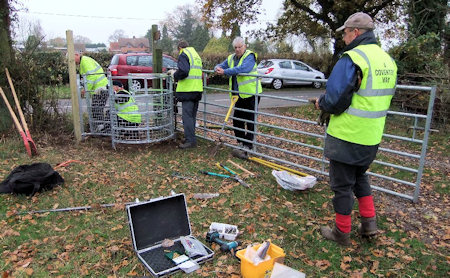 Kissing gate replacing stile where Walk 1A leaves Back Lane

The second Work Party did 4 tasks near Back Lane where ACW & Walk 1A cross the Lane.
The first task completed was to replace the stile where Walk 1A leaves Back Lane with a kissing gate. The challenge was to site the gate to avoid the large oak tree and the ditch, and leave adequate room for farm vehicles. After agreeing the location, the task was completed in record time. 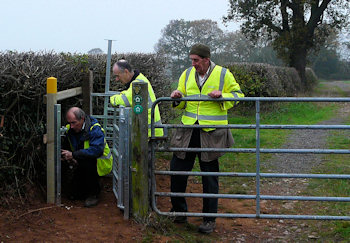 The second task completed was to replace the stile where ACW leaves Back Lane with a kissing gate. The challenge here was to site the gate so that it fitted in the narrow space between the field gate and the hedge. This was solved by adapting a configuration we learned from WCC when we used it at a Work Party on 18 March 2009, but in this case we built the fence as half of the cage. The plan worked well, but we also had to dig out lots of the bank and hedge roots – but the end result was good, and finished by 1:00pm. 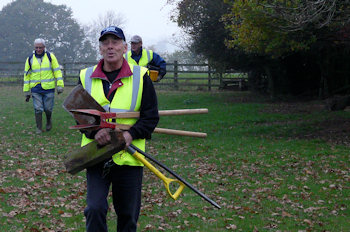 Returning from repairing the old stile

The third task was, at the request of the farmer, to repair the stile which for many early years was use by ACW – small breakaway teams visited about three times, leaving a much better stile repaired by parts from the stiles we had replaced. The fourth task was repairing the cage of the wooden kissing gate found cracked on the way to the stile, and repaired by using the 3rd new fence rail liberated from task 2 because the earth bank of the hedge made it not necessary.
Another enjoyable and productive day. Walks 1 and 1A are now stile-Free. We finished all the work a few minutes before 1:30 pm and then had yet another good lunch in The Bear at Berkswell.