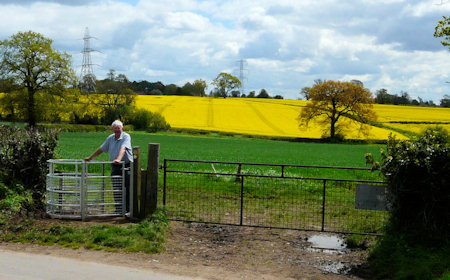 This month’s tasks were to replace two stiles with kissing gates between just south of Baulk Lane and Berkswell Village, both on Walk 2 of the ACW Circular Walks Book. These were the last one of five stiles to be taken out of the Ram Hall to Berkswell section and the first one to the south of Baulk Lane, and are part of Solihull’s aim of making our Walk 2 entirely stile free.

The gate at site 6 needed special orientation to meet the farmer’s needs to open the field gate into the field and fully back to the fence/hedge, but to also open it into Baulk Lane. The plan adopted achieved this need, and equally made a good route through the kissing gate for walkers.

We met Phill on-site at 9:10 in order to confirm the plan was feasible, and by 9:20 two of us had started work while Phill went to tell the farmer that all looked good. By 9:30 Phill was back in Berkswell to deliver a gate to the site 5 team, and two more were on the way to join us. Thus, in spite of uncertain details the day before, two teams were at work in good time. 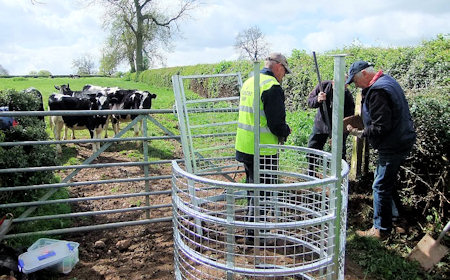 New kissing gate at site 5 being installed, “helped” by a herd of young cattle

The gate at site 5 also needed careful orientation to fit with the field gate and the hedge to the west, but first the team had to help the farmer drive a herd of young cattle into the correct field. This was the first time ever that they had been put out in the great outdoors. Both gates were installed with very little difficulty.

Both tasks were completed by about 12.50 so we could again go back to The Bear in Berkswell for lunch.