We installed two more kissing gates on Circular Walk 2, this time between Berkswell and Benton Green. 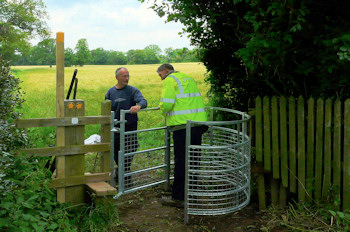 The new kissing gate at site 7, with the step of the old stile as a seat

This month’s tasks were to replace two stiles with kissing gates on the path from Berkswell Village to Benton Green, both on Walk 2 of the ACW Circular Walks Book. These were the last ones on the northern part of Walk 2, and are part of Solihull’s aim of making our Walk 2 entirely stile free. 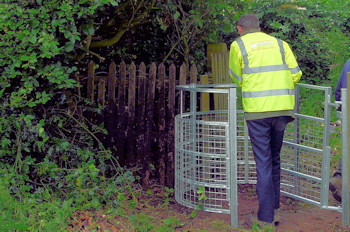 The kissing gate at site 7, showing the old picket fence retained as the barrier

The “stile” at site 7 was actually the fence built to fill the gap where a pumped sewer had been installed some years ago.

We sited the new kissing gate to the north of the stile step after removing a dying old Elder tree (the hardest part of the task) and linked up to a slightly relocated picket fence found in the hedge.
To complete the installation we added a waymark post so that after future crops are sown re-instatement of the path to this point will be easier.

The result is an attractive, easy to use barrier crossing, retaining the step of the stile as a seat, with the warning notice about the sewer exactly where we found it. 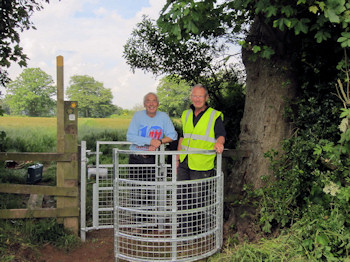 The kissing gate at site 8, viewed from the east 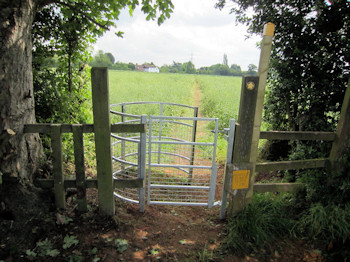 The kissing gate at site 8, viewed from the west

The “stile” at site 8 was also a fence built to fill the gap where another part of the same pumped sewer had been installed some years ago. This time however the stile step was to the south of the pipe and sloping towards the NE.

We sited the new kissing gate to the north of the stile, but this time connecting the kissing gate directly to the stile post, and having the hoops fully on the east side in order to maximise the space from the large tree.

Another fence post to the north was left in place, and a new fence constructed from the rails removed from the gate site to link up to the big tree.

To complete the installation we removed the stile step in order to give clear access on the east side, and again added a Waymark Post. The result is another attractive, easy to use barrier crossing.

The day was sunny and warm, and we even welcomed the shade available at both sites – we noticed however that for the first time in 2012 the soil was damp right down to bottom of a 2 ft hole. Both gates were installed with very little difficulty. Both tasks were completed again by about 12.50 so we could again go back to The Bear in Berkswell for lunch.