In memory of Cyril Bean Mr A Coventry Way, on 3 October and 17 October work parties installed one p/g and one kissing gate where ACW passes into and out of Meriden churchyard, and a new waymark post opposite the Queens Head.

This month’s tasks were to replace the crumbling wooden gates where ACW passes into and out of Meriden Churchyard, with new replicas made from solid oak. These are installed as a fitting memorial to Cyril Bean, as well as an overdue upgrade of two gates which needed replacements of suitable quality and appearance. 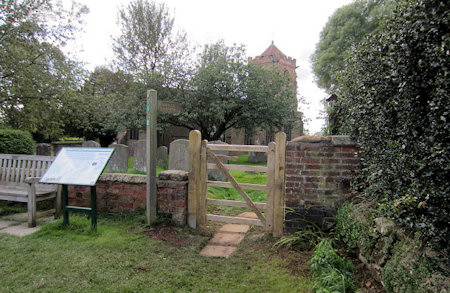 The first task completed was the p/g. This turned out to be a direct “plug-in” replacement of the new wooden parts, with the new posts dropping in to the slightly enlarged concrete holes used by the old gates, but having to use the old hinges to make it fit properly, including using a similar small strip of wood to correctly align the bottom hinge (this piece of wood will be replaced by oak on 17 October). The result looks excellent, and has already been admired by many users. 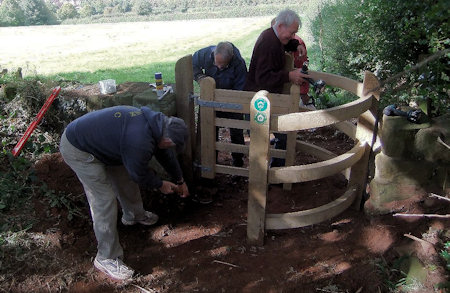 The new kissing gate as viewed from the churchyard

The second task was to replace the kissing gate. The task started with ease – removal of the old hoops simply involved lifting the whole assembly of the ground, as all three posts were completely rotted away below ground. Fitting the new hoops however led to difficulties, which were eventually overcome. Fitting the gate post and gate was less difficult, but like the p/g required a temporary extra piece of softwood (this piece of wood was replaced by oak on 17 October). The tie-bar planned to be fitted underground to ensure long term stability had unfortunately been made too wide, so this was shortened and fitted on 17 October. 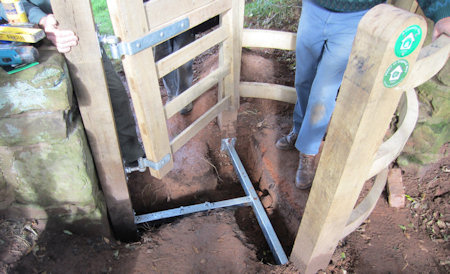 The “tie-bar” as viewed from the churchyard

On the second day we: 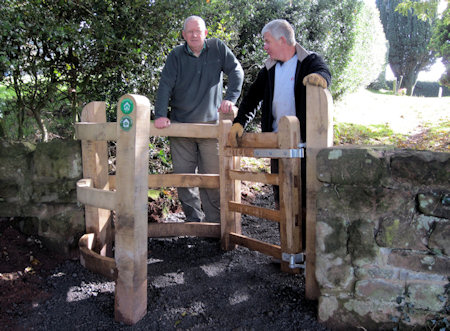 The new kissing gate as viewed from the north

The days were both sunny and reasonably warm, with the only rain coming while we were in the pub having lunch (… yes, on BOTH days, with a heavy shower timed to start as we ordered lunch, and stop before we wanted to leave). On the first day the task was long, but both tasks were completed as far as possible by about 15:30 so only a few went to the pub for lunch. On the second day we finished by 13:20 so got to The Queens Head in good time for lunch.