We installed another two kissing gates and 2 sleeper bridges on ACW Circular Walk 20 beyond point 6, near to Close Wood going south west from Kinwalsey Lane. Then on 6 February we fixed two stiles and two wooden gates, all between CP6 at Breach Oak Lane and The Laurels on Coventry Road at Corley Ash.

This month’s main tasks were to replace two stiles with new metal kissing gates on ACW Circular Walk 20 within quarter of a mile of point 6, near to Close Wood going south west from Kinwalsey Lane (GR 256844). Extra tasks were to build 2 sleeper bridges and dig ditches to prepare for finalising the November tasks by adding road-stone to the hopefully dried out mud. 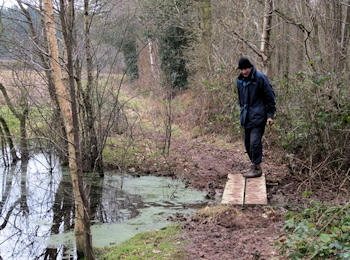 Near site 1 & well before NAAFI time, team 4 had completed a substantial sleeper bridge and dug a canal so the pond’s overflow runs into the ditch before flooding the path. We used the two new sleepers supplied, nailed to bearers recovered from the step support posts from one of the stiles. An unplanned task, but a great improvement on a path we found much wetter than in November.

At sites 3 & 4 conditions were much better, with sandy and pine needle soil making digging holes easy. Teams 1 & 2 completed both stiles before NAAFI time. 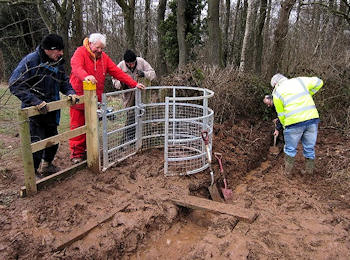 At site 2, we found November’s little draining ditch had disappeared, so team 3 got to work digging a “bypass canal” for floodwater, and with a bridge-kit of three old stile steps and two stile posts built a small sleeper bridge. The mud in the kissing gate and nearby was still as bad as when we left it in November, but we will now have to wait for it all to dry out so the path can be levelled and road-stone surface made on our next visit.

Weather was cold, but there was no rain. We finished by 1.00pm and half of us got to “The Queens Head” in time for an early but very welcome lunch.