We replaced two old wooden stiles with two metal kissing gates on Circular Walk 20, just north of the Fillongley Road, Meriden bridge over the A45. 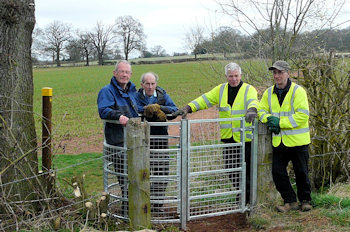 Both sites were very easy to work, with the risk of finding roots of the large oak tree at Site 1 turning out to be no problem, and the only slight difficulty at Site 2 being a large sandstone rock where one hole was needed but which could easily be dug all round and the rock lifted out. This looked as though it might be hard, as I saw Bob B diving right into the hole – but before I could have my camera ready for an action shot Bob reappeared with a great stone in his arms. 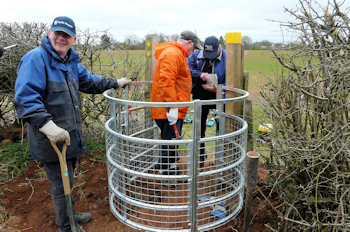 Bob W and I had walked further north to remove a protruding nail from the kissing gate on the Warwickshire border, and even before Phill had arrived at the meeting place I had fixed the kissing gate near the road by adjusting and tightening the hinge nuts. All the other kissing gates we had installed on 15 August 2007 and 21 May 2008 were checked with no problems to fix. Today’s work means that we now have a stile-free route all the way from Meriden to Kinwalsey Lane.

Weather a bit warmer, and dry – maybe spring has come at last! We finished by Noon and about half of us got to the Queen’s Head for an early but very welcome lunch.