We installed a new boardwalk on Path M268 to replace a couple of old pallets which bridged the mud (but were often submerged after heavy rain), and replaced the stile with a kissing gate at the junction of Path M268 with Fillongley Road, Meriden (GR 249 829). 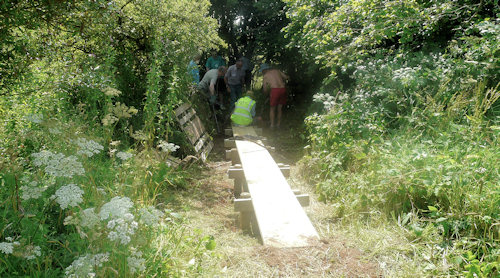 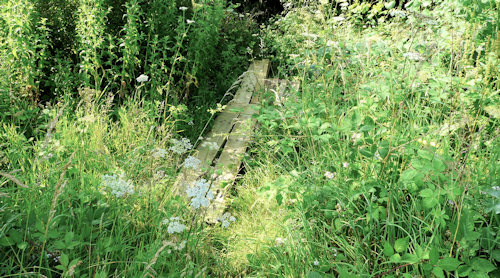 The site for the new boardwalk, with the first few planks identifying the position

We thought the planned task was to build a simple two-plank sleeper bridge, but the day before we learned that we were to build a 6-plank boardwalk. This allowed the sometimes muddy wide ditch to be completely bridged, from the high bank to the west sloping gently down to the low bank to the east. With just the planks laid out, a regular dog walker told us that the water was often twice the depth needed to cover the pallets – so we hope the new boardwalk will mean the route is always dry.
The boardwalk task went very smoothly, thanks to a strong team willing to dig lots of deep holes in brick rich soil – the only problem came with the last nail which took 4 attempts before getting it to go straight into the hard bearer without bending. We also cleared the undergrowth and protruding trees which had made it difficult to use the path to the east as far as the “stile with gap” and the edge of the field. 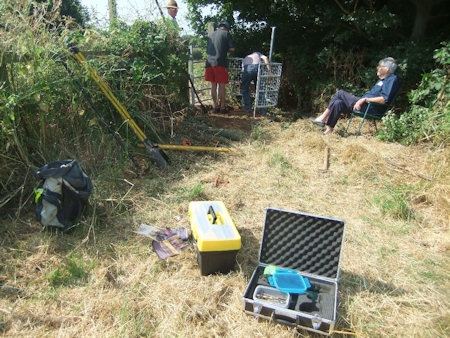 The Kissing gate under construction

Meanwhile a small party of 4 replaced the stile by the road with a metal kissing gate. A simple task, but hot work in the sun, with the meadow scorched brown.

The Seat in the shade by the Lily Pond

This part of Path M268 is not an ACWA route, but links to Walk 20. A fine feature of this walk is the Lily Pond, complete with carp and a seat in shade all the morning – this alone makes it “worth a detour”, and with the new improvements should deservedly get used more.

The day was sunny, and the hottest day in 2013 so far. All were warned to use sun lotion, wear a hat and drink plenty. The last point was pushed hard by John supplying his usual NAAFI service, but mainly with cold drinks at very frequent intervals. At the boardwalk site we had even better service from the surrounding trees which provided full shade for all the task team for nearly all the time we were doing the work – even keeping the site for the last nail shady right to the end.

All work was completed by about 1:00pm. Over half of us got to “The Queen’s Head” for a very welcome lunch.