Between 3 October and 20 November four work parties were in action restoring a drier path along the Definitive Route at the north end of Corley Moor CRoW Open Access area. 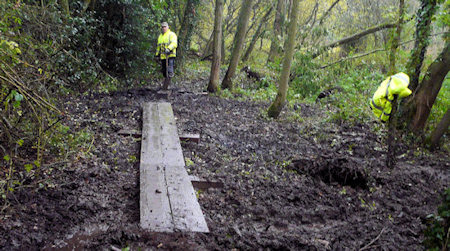 The 3 sleeper bridge and the site for the 2 sleeper extension to be added, which will take the bridge to where Bob is standing 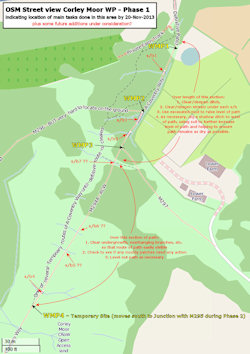 30 October – we made a start at restoring a dryer path along the Definitive Route at the north end of Corley Moor CRoW Open Access area. The work done included:

The map on the right shows the status we reached by end of Phase 1 of this project.

Almost unbelievably the day was again warm and sunny, though very wet underfoot following the previous Sunday night’s heavy rain. All work was completed by about 1:15pm. Most of us went to “Bull & Butcher” at Corley Moor for another very welcome lunch.

6 November – we had the planned “Digging Day”, which in spite of trouble with rain on the days before and drizzle on the day achieved a lot of the required digging, plus initial clearing of the path through the wood to the south and improvements to the alignment of the temporary bridges. However by 1:00 pm we decided to call it a day so once again almost all of us got to “Bull & Butcher” at Corley Moor for another very welcome lunch.

13 November – we returned again and completed the building of all the bridges started on 30 October. We also did a bit more digging, but will still do more on 20 November before declaring the path open (then maybe more next year when the soil is drier to ensure the path stays dry and the ditches do not silt up too quickly). 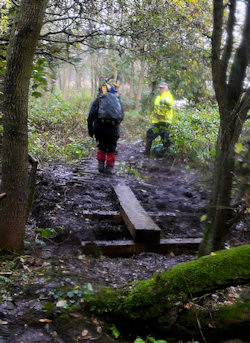 The temporary two sleeper bridge, on better alignment and with earthworks beyond to the south

We also moved east and south. To the east we cut a dry path through the brambles and nettles where M297 definitive path should join ACW. To the south, we marked the route for the path through the wood and down to where it will join the existing path. We marked the route using canes with “yellow flags”, consulting GPS to place them individually then visual alignment to make sure they follow a straight line or smooth curve matching the Definitive path. Finally we marked the end with a Way Mark Post and notice.

20 November – we returned for the final session of this phase.
Work done included:

We then declared this stretch now open for use, and returned to the “Bull & Butcher” for another very welcome lunch.
However we may very well come back sometime next year to add a few finishing touches.. 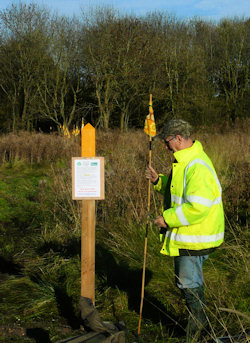 The WMP and notice plus a spare cane at the southern end of Phase 1, complete with notice outlining what we are doing 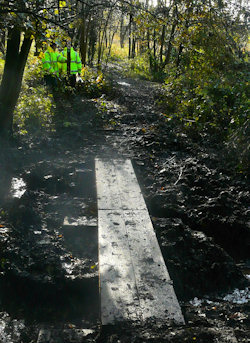 Sleeper bridge 3 with, just beyond, a new WMP where path M297 turns off to the left
We use cookies to help you get the best from our website. If you continue we'll assume that you are happy to receive our website cookies. Find out more.