We improved the path S of Birchley Hay Wood.

The heap of stone ready for use

We raised the surface of the path where needed using soil from deepening and widening the ditch, and then made the path contour smooth, and finally added a surface of stone chippings. 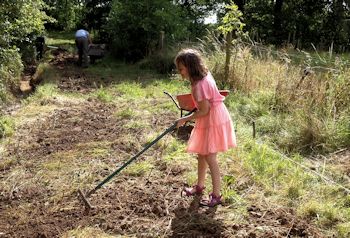 Our youngest volunteer yet

In spite of short notice, we had a turnout of 10 on the day, plus three shorter sessions during the week before to start the digging by individuals or small groups.

Nick could not make it to work during the day, but made a quick visit to take most of the photos. He also brought our youngest “volunteer” yet, who did an excellent job of raking the remains of the ditch diggings onto the site for the path. 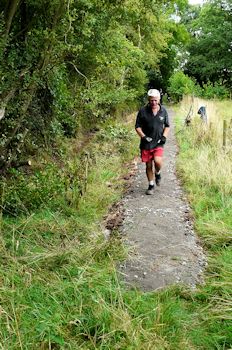 The hardest part of the task was shifting most of the clay dug out of the ditch at the east end to the lowest path near the west end, thus increasing the height of the path to be just about guaranteed clear of the maximum height of water in the ditch/ holding pond.

We then smoothed the surface to make an even path, with a camber so the highest part of the cross-section was in the centre of the path. Finally the triumph of shifting a few tons of stones, raking it to give a reasonable surface. Then of course to test the result with the first ACW runner. We hope we now have a stable and never flooded path. However we will return to check the result after the next wet periods, and if needed improve it a bit more.

After many years without a reasonable solution, the eventual plan agreed was to extend a ditch to the north of the path from the flood area to an existing pipe going under the path into the to the pond to the south, and a basic implementation was completed by the farmer in June 2013. This has proved successful for over 12 months, with the ditch only being full a few times, and the highest level never quite flowing across the path. The path however was often muddy, getting wet from the rain and not drying until the water level in the ditch had reduced. The work done today should work like the final solution.

It is however recommended to do more work to:

Another almost dry and sunny day made working a pleasure. All tasks were completed by ca.1:30pm. Some of us then yet again went to the Bull & Butcher and enjoyed a good lunch.