On 3 September we built 2 sleeper bridges on Corley Moor, then on 17 September we replaced 2 stiles with kissing gates on ACW route just south of Bubbenhall, near Broomhill Farm. 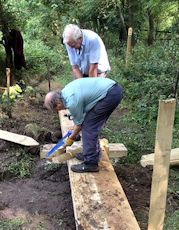 The 1st sleeper bridge under construction 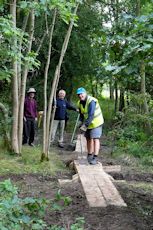 Another dry and sunny day made working a pleasure. All tasks were completed by ca.13:00. Some of us then yet again went to the Butchers Arms for a good lunch.

On 17 Septemeber we returned to install two more kissing gates on ACW route just south of Bubbenhall, near Broomhill Farm. 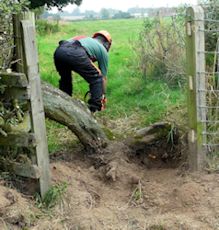 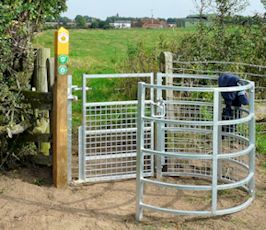 The first kissing gate looked an easy task, but removing the old stile revealed a hedge stump previously hidden under the stile step – fortunately the WCC Ranger was still on site and had his chain saw ready to help – but it still needed some hard digging to clear the way. Fitting the kissing gate was then easy. 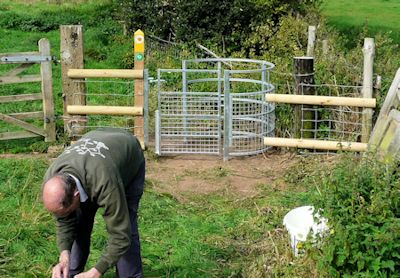 The second kissing gate looked more of a challenge, with the “stile” to replace actually being an ancient oak gate attached to everything in sight. In fact it came out without too much trouble, and installing the kissing gate was easy but then we had to build the new fences on either side to produce a smart looking solution.

Yet another dry and sunny day. All tasks were completed by ca.13:15. Some of us then went to the Malt Shovel and enjoyed a good lunch.