On 5 November and on 19 November we installed a kissing gate on ACW route and 3 kissing gates plus a sleeper bridge on CW7A, all just south of Bubbenhall, near Broomhill Farm.

Day 1 – 5 November
At Site 1 we installed 1 kissing gate on ACW route. This kissing gate completed replacement of all the kissing gate son this stretch, with a net effect that the first stile on ACW in Warwickshire is now nearly into Bubbenhall. The stile this kissing gate replaced was a challenge to remove due to many bars of old metal gates incorporated as part of the stile, but was still the site to be finished first. 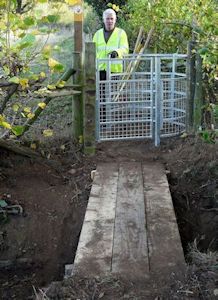 We also installed a 2nd kissing gate plus a sleeper bridge on Circular Walk 7A, also just south of Bubbenhall, near Broomhill Farm.

Site 2 however was possibly more difficult with the team having to dig through a great deal of roots to set the gate and sleeper bridge in. We were however helped by a decision on the day to only install 1 kissing gate at this site instead of the 2 expected from previous plans. But despite this, all work was finished by 1pm when most of us went for lunch at the “Malt Shovel” in Bubbenhall.

Day 2 – 19 November
Our final working party of 2014, on November 19th, was once again in the Broomhill Farm area near Bubbenhall.

This was our fourth and final visit to the farm where we have now installed nine kissing gates, all of them replacing very “tired” stiles.

This time we replaced two very “quaint” but narrow and difficult to climb stiles which are on Route A of Walk 7 in our Circular Walks Book. This has now made this walk almost stile free. 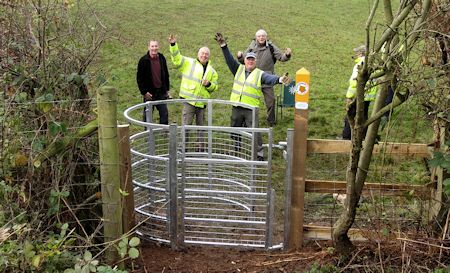 We were very fortunate with the weather which was cloudy but dry, and when the work was completed just before 1pm and we walked back across the fields to the farmyard, the sun broke through as if to say “well done guys, a good job done”. We then had lunch at the Malt Shovel pub.