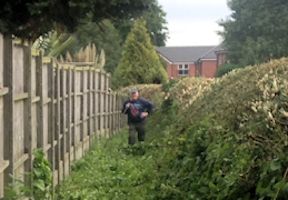 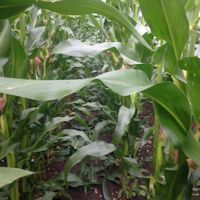 On 2 September a small team returned to the same path a work party had previously visited on 17 June and cleared a stretch of blocked path on CW16 leaving Bennetts Road North to clear the nettles, etc. which had grown since. The farmer had cut the other side of the hedge, including cutting the top, so the overall effect looks excellent.

The team then moved on to the southern end of path 17A, and cleared a path through the maize.
On 9 September Bob Carey, (as a follow-up to Nick’s report on Walks 7 and part of 8) did a visit to Walk 7 to check on the state of stretch from Bubbenhall Wood to the leg to the south of the land-filled quarry. Bob slightly re-sited a WMP (and will return to dig it in later) but found the stretch to south of the land-filled quarry now clear. On the path along the SW side of Bubbenhall Wood Bob spent two hours making a path just about usable but confirmed that a full work party should work on this stretch ASAP.

We tried to get a team for 16 September (the 3rd Wed in Sep), but only had two people available – and the weather forecast was bad. We therefore changed the date to Wednesday 23 September when five people were available.

On 23 September the five of us attacked the path along the SW side of Bubbenhall Wood with our two electric hedge trimmers, our petrol strimmer and hand tools. This resulted in a well cleared section over the first ca.150 metres but leaving the remaining ca.650 metres for another day (or more?).

On 5 October Bob C & I had both hedge trimmers on my workbench. Prior to that we had discussions via email & phone to propose causes and fixes, which on the bench proved our theories, and in less than 2 hours we had completed repairs and service on both. Basically tightening 4 very loose screws made inside of gearbox as new, including extra grease inside the gearbox. The broken end of the blade was fixed by grinding the end sections off the top and bottom cutters and the “U shaped girder” support so the new end looked just like the original (but the whole “Shear Blade Component Set” is a bit shorter. Re-oiled generously had it all working (almost) as good as new. Much cheaper than buying a new “Shear Blade Component Set” which is priced on most lists as almost the cost of the discounted complete new tool.

However we must all take care not to try cutting wire fences, and checking if any service actions are needed – in particular oiling the blade every hour of use.

Thanks to all who took part in these work parties, and thanks to all others who have done similar small jobs.