In early October two small work parties did more path clearing. On 21 October, a full work party cleared the path from Hodgett’s Lane to the bridge over Greenway – part of Walk 3A. 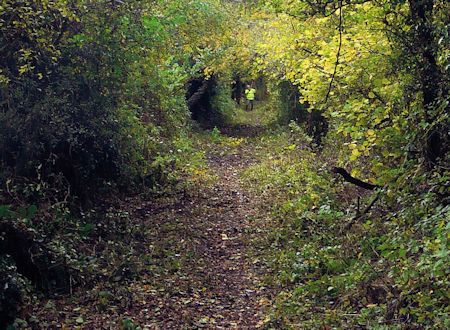 Part of the cleared path 03A, with the ditch on the NW side

On 1 October. John A/Bernard carried out a full check and actions as practical on Walks 2 & 2A.

On 16 October. BobC + Bill + Barry + Simon were back at “CW16 leaving Bennetts Road North” to add two new WMP a bit further on plus a bit more clearing.

On 21 October the main work party cleared the path from Hodgett’s Lane to the bridge over the Greenway – part of Walk 3A, and then continued beyond the Greenway to clear parts of the path to the  junction with Walk 3 and back down Walk 3 nearly to Beanit Farm. With two fully functioning hedge trimmers and a reliable strimmer, supported by a lopper and saws for the odd tree and slashers, most of the clearing was completed. 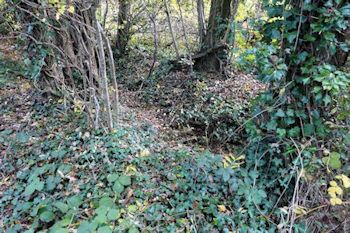 The ditch on the SE side 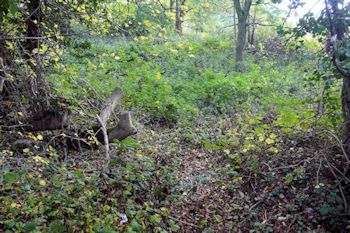 The other task we started on was restoring the flow of water from the ditch going through a pipe under the path. The ditch on the NW side just before the pipe was cleared and delivered lots of water up to and into the pipe. Unfortunately we could not locate the outlet of the pipe, or even work out where it should get to. By the time Phill arrived and told us, time did not let us complete the task.

The pipe apparently goes under the path at an angle, and then used to flow into the ditch on the SE side of the path, with the water flowing NE to about 80 metres from the road where the ditch turns right and takes the water into a pond/marsh/sunken new woodland.

The ditch near the pipe is filled for several metres with stones and soil which is what foiled us, and then made finding the end of the pipe not achieved. Maybe we will return another day.

Afterwards some of us went to the Peeping Tom pub for lunch.