We repaired two kissing gates on ACW & CW06 on either side on Leamington Road, Stoneleigh, the 1st to the East and the 2nd to the West.

The 1st kissing gate was one of the first we installed on 15 January 2006, and then maintained for the first year. Since then much use had lowered the surface going through the gate area and caused ever deeper mud or water, and the slam post had leaned over causing the gate to stick inside the slam post. Both are now fixed, with the water now being drained via a shallow ditch and the area inside the gate raised and stoned to hopefully be drier for a few years. The slam post is now supported by a new wooden stay post. 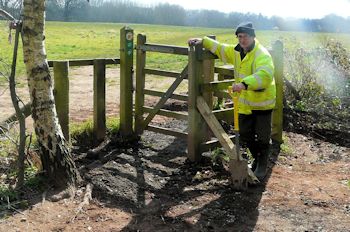 The 2nd kissing gate was one of the original wooden gates which by 2006 looked as though they were getting near the end of life. By 2016 it was leaning in all directions with all posts rotten underground. We added wooden “godfathers” and other timber so we hope it might have a few more years of adequate life. 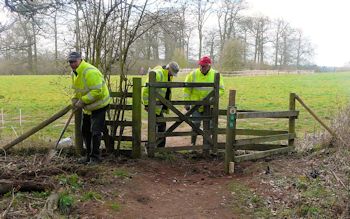 Afterwards some of us went to the the “Malt Shovel” in Bubbenhall.