We installed 2 kissing gates near Lavender Hall Fishing Lakes, one on Walk 2 and the second on M196 nearby. 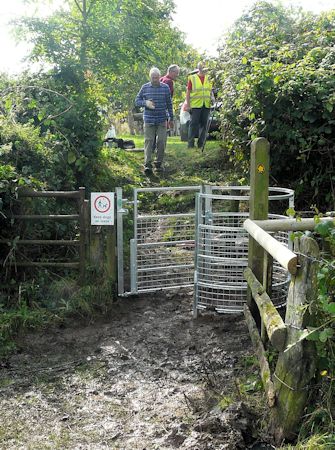 The first task was to trim back the hedge to improve the path and cut back a space to fit the hoops.
The kissing gate fitted in well after we realised that the best way was to completely dismantle the two short fences.

Our original plan was to also improve the steps near Site 1, but we soon realised time and effort made that impractical. We will be back soon (probably October) to do that task, and maybe to also improve the drainage on the other side of the kissing gate.

This photo also shows the site for action to improve draining over the blocked culvert.

This stile was in very poor condition and hard to use.
The new kissing gate proved hard to install due to stony ground, but was very much appreciated by local users. 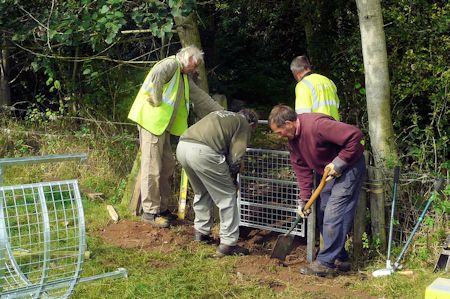 We had 7 volunteers to work, plus Bob C to cheer us on while avoiding to damage his finger recovering from an operation a few days before.

A day of mostly fine weather, with only a few drops of rain. We finished at 13:58 – too late for hot food at the on site cafe, but had hot or cold drinks, and snacks while sitting on their veranda. A very pleasant spot.