We installed a new set of steps near Lavender Hall Fishing Lakes, on 21 Circular Walk 2. 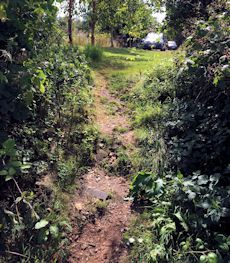 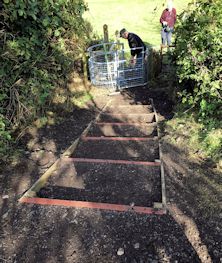 Site 1 is where we installed a kissing gate on 21 September 2016. The k/g was debatably the last stile on Walk 2 (BUT there are 2 stiles at Site 3, where for most people there is a narrow gap beside each of them, plus another stile where the path reaches Spencer’s Lane at Carol Green which at one time was bypassed by a gap, but for recent years the gap is usually blocked by a locked f/g).

However one of the worst objects in the way of walkers was the very rough steps on the South West side of Site 1, and we always said that we should rebuild a good set of steps to replace the hazard on the same day we replaced that last stile. We failed, but only by one month.

The new steps were carefully planned, and to save cost we used six good second hand steps from stiles we had replaced with k/gs – including two from the September 2016 work party. SMBC supplied us with stakes to support the steps and about 2 tons of stone for making a good draining filling and a good surface. Then all that was needed was most of our stock of screws and plenty of good volunteers.

Aaron emailed to say thank you for our efforts, and for those of the team. Once again, a brilliantly successful day out and I am delighted with the outcome.

Aaron must also be thanked. Not only did he make the arrangements, but helped with the work while he waited for the delivery of the second ton of stones. 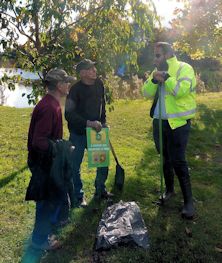 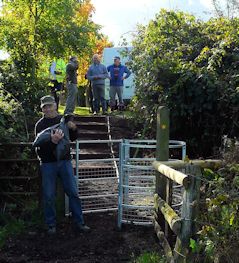 Final bag of stones being carried to the
kissing gate

Site 1 NE. Made a temporary stone path over the blocked culvert. 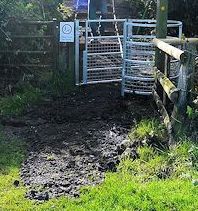 SMBC and the landowners know about it, and are working on the best plan to repair the situation.

As a temporary fix, we made the path a narrow but thick layer of stones, but with a small gap (about one foot wide and one foot deep, but half filled with stones) to let flood water trickle over the path and walkers to step over the ditch.

We had 7 volunteers to work, plus help from Aaron.

A day of fine sunny weather, with not a drop of rain. We finished at 13:25 – just 5 mins before last orders for hot food at the on site cafe, so half the team went up and ordered for the whole team while the other half packed up the tool wagons. A very satisfying meal.