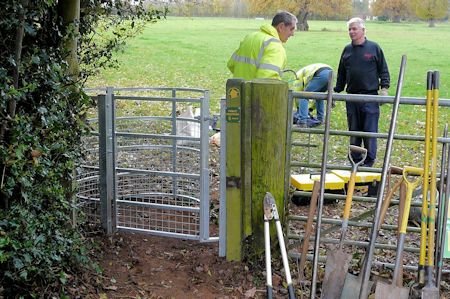 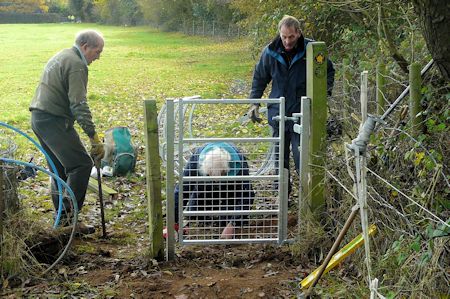 Both tasks were fairly routine, but most holes had to be dug in hard stony ground.
Kissing gate 1 was planned to be done the same day, but unfortunately only 2 gates could be supplied. This will be scheduled for another day, during December.

A key point about 2016 was that all 9 kissing gates installed by ACWA work parties this year were in Solihull.

We had 8 volunteers to carry out the work. Another day of fine sunny weather, with not a drop of rain. We finished at about 13:30, and 4 of us then went to the Bell Inn for a satisfying meal .

On Friday 16 December a second work party installed a new kissing gate to replace a stile, on 21 Circular Walk 3 section near Tanners Lane, and also made the stile near the road a gap, added a seat and strengthened the sleeper bridge near the road. 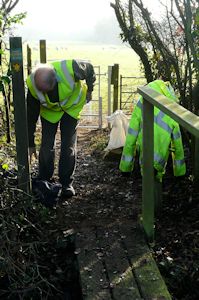 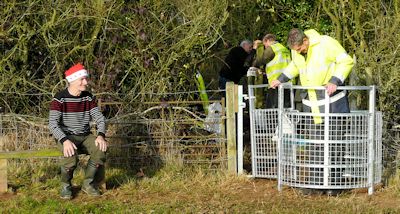 Also on that day a one man team supported by SMBC delivery went to Meriden and installed a new Finger Post where ACW leaves Church Lane. This replaced the Finger Post at that site which had recently vanished.

A team of 7 volunteered for the extra work party on Friday, and all tasks were finished by 12:30. The Wednesday of this week was the day for an ACWA Christmas lunch at “The Sparrow” in thanks for another year’s work. That did not stop 5 of us going for lunch at the “Bear at Berkswell” on Friday!