15 November 2017
We further improved the path leaving Hodgett’s Lane to slope down to Greenway – again raking on the muddy parts beyond the culvert. 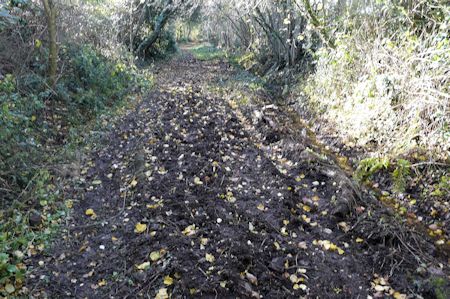 About the soil needed over the first stretch

Unfortunately the ground was somewhat wetter than we had expected, with more water flowing down the ditch than we had hoped. Highlights of progress included:
Good progress on the first stretch, with what looks like enough soil ready to dry off, rake to a good profile and be ready for a stone layer.

At the other end of the stretch, through the k/g a shallow ditch was completed, draining enough water from the big puddle and feed it into the top end of the ditch.

The new strimmers fitted which uses the “DuroCut 40.4 size XL 3mm serrated” line pieces again showed another fast clearing of all the undergrowth.

Phill and his new manager not only praised the progress but believed they could supply enough stone to finish a usable path early in 2018.

A weak moment was a rush to get the water flowing into the culvert. This led to a blockage after a few minutes. Later in the morning the water was flowing, and still going a week later. 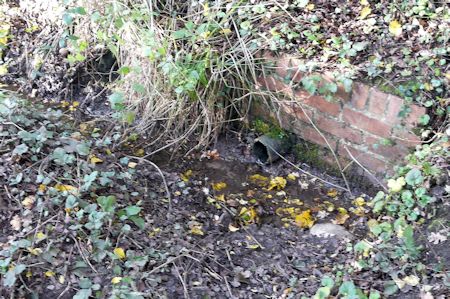 The culvert, the ditch input on left, input from the grassland
towards the NW and the “soak sump”

Our team of 9 achieved about what we expected, and we finished at ca.11:30. Five of us went to The Bear for lunch and were served very well compared to two months ago. This time with everything on the menu available and staff who looked after us. We noted that there were a lot of new staff and fewer customers.

The next WPs will be on Wednesday 14th February 2018 & on Wednesday 21st February 2018.
The idea is that the first day will start on the plan with a small team to determine details, then some of that team continuing joined by a much larger team. The actual plan will be determined jointly with the key people, inc SMBC & suppliers of stone.

Details will be as below:
Wednesday 14th February 2018 at 9:30 am to about 1:00 pm &
Wednesday 21st February 2018 at 9:30 am to about 1:00 pm
Location: Hodgett’s Lane (GR 263 768) to slope down to Greenway just before bridge over Greenway – Part of Walks 3/3A.
Park at: Hodgett’s Lane (a few spaces near to GR 263 768 and a few more further along Hodgett’s Lane c.100 metres near to the NW where Walk 3A goes NE via a k/g)
Meet at: As above
Task(s):
Continue to improve further the muddy parts beyond. We plan to include this month finishing the first section(s) by finalising the slope over the path, adding a garden weed fabric to give strength and covering the central metre with stones (provided by SMBC having the first loads of tons of stone for surface. See Map for details
The 2018 dates (assuming 3rd Wed every month as agreed at the AGM 2018) will probably be: